ECN Forum
Wait a minute.......Isn't the water supposed to come out of the yellow thing? 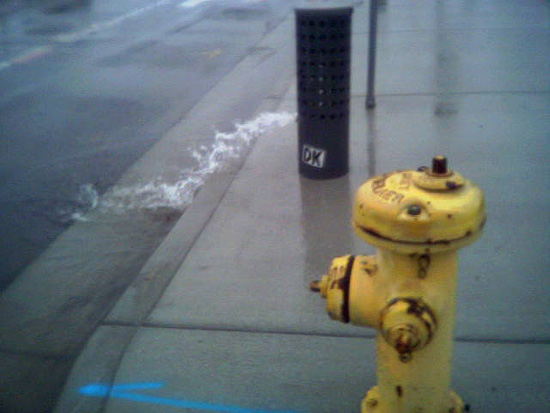 I would say it is definitly not OK
Actually that IS O.K., it means the sump pump in the vault is working....
Off topic. That's a strange looking fire-plug. What city is this?
As to the fireplug, it looks normal to me... Appears to be a Rensselaer.

The "non-freeze-resistant" types (the official name escapes me) do look quite different, at least to me- saw them when I was in San Diego a few years back...

[This message has been edited by Sir Arcsalot (edited 01-11-2005).]
Looks like there might be some sort of a gearing mechanism in the top of that Hydrant, judging by the shape of the top part.
Possibly, this could be to turn it on quicker than a direct drive spindle.
Could one of the FF's here please explain why there are two sizes of couplings on that Hydrant?.
The larger one looks like a standard Feeder size, what is the smaller one for?.

[This message has been edited by Trumpy (edited 01-12-2005).]
You're lucky you can see the fittings to ask questions. All the fire hydrants in Britain are located under the pavement, accessed by lifting a cover plate. There is then a yellow marker sign at the side of the road to show locations.

The following link is aimed at kids, but it demonstrates the method quite effectively:
http://www.angliacampus.com/education/fire/junior/hydrant.htm

(The firemen among you might find the pages about the London Fire Brigade of interest.)
The 2 types of connections are refered to as steamer and 2 1/2 most places use the steamer, usually 5" connection because of ease of use, amount of flow and less friction loss (resistance) as for the type of hydrant it might be a dry type which means there is a stem from the top of the hydrant down to the H20 main as to prevent freezing. in warmer places the use a hydrant like you see in the movies and this picture when someone runs it over the water shoots out... there is water up to street level.

Hope i covered it

A few years back, I saw in the Washington Post (I think) about a large fire that had occured in the early days of hydrants and such. I believe the fire was in Baltimore. Anyway, they called in several firefighters from the nearby ares. It took several hours for them to get to the city in horse-drawn wagons, etc. They arrived greeeted by the displaced residents cheering them on. They tried to connect to the hydrants, but each had is own standard of hydrant thread (The Baltimore hydrants had only one size, rendering the new help useless.)

Later they came up with the new hydrants. (ie multiple sizes).

Hope this helps somebody,
drew

[This message has been edited by sparked (edited 01-12-2005).]
I think they call that a "dry barrel" hydrant, common in very cold places > also common in the desert for some reason ????
It's in Anaheim, CA 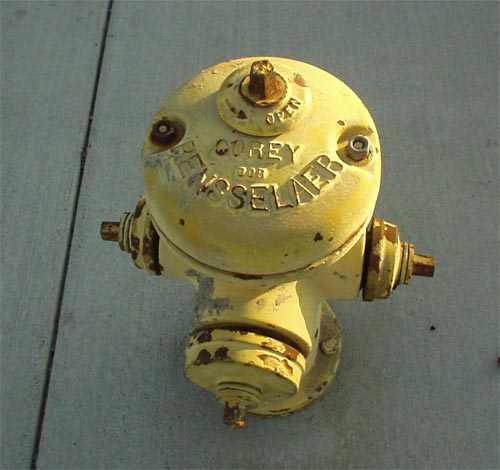 This poor pump was at work every time I went by for about 4 days in our recent rain storm. 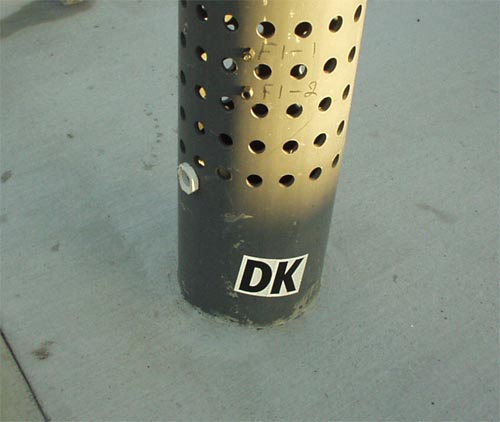 The Mutual Aid companies being unable to connect to the stricken dept's hydrants has many points of origin - the one I heard was NYC in the 1890 - 1900's.

The "Steamer" can be one of many different sizes (3 1/2" - 6") and threads - some cities (NYC, for ex.) still use "proprietary" threads. The side ports are 2 1/2" NST - National Standard Thread - so any arriving company can utilize them.

BTW - the "National Standard" of dia., thread pitch and TPI was determined a few years after one of those "y'all come" debacles described here...

So why do the oddballs have their own proprietary threads? Is there some advantage to this? It seems to my that it all downside, with nothing to gain. It costs more, probably a lot more, because you have to have everything made custom, and you're really hosed if you need help from the next town over. I don't see any gain at all.
I think the reason we don't have a standard is installed infrastructure. When an area has hundreds or thousands of existing hydrants and miles of fire hose, conversion just is not economically feasable. I worked with a volunteer department near Denver and we had taps and dies to convert to the Denver standard. For cost reasons, we bought equipment anywhere we could find a good price. The thread diameter was standard but the pitch was slightly different. Since fire protection in the US dates back 200 years or so, communication was poor and each area probably just set a standard as the need arose.
OK, that makes sense.
I can't help but wonder if the proprietary threads date back to when bigger cities had multiple fire companies operating in different neighborhoods.

Remember, back in "the day" fire companies used to fight over who would put out the fire, since the insurance companies paid the first folks to 'water' the fire. Maybe the modern mindset was "NY water for NYFD only", "Boston water for Boston FD", etc.

Also, as anyone who's worked for a municipality can tell you, once the wheels start turning, it's hard as hell to change their direction. Once all the engines got hoses with thread 'x', it was "cheaper" to keep special ordering new hydrants with thread 'x' than:

a) get all new 'spuds' (the threaded part of the hydrant port) for all of the city hydrants, and pay the water guys to install them, and

b) get all new couplings for the engines and hoses.
Look Ma, no threads!. 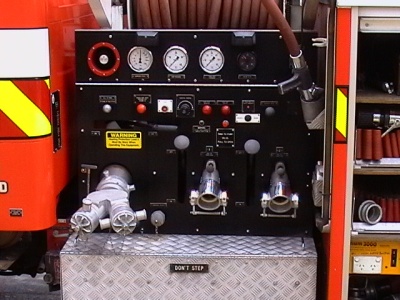 We use Hermaphrodite couplings here for our hoses.
The Female end is used on all Pumps and Stand-pipes (the section of pipe that we fit into the Hydrant in the road).
You can see the corresponding Male end to the right of the picture, sticking out of the hose tray
Trumpy, do you guys have stortz connectors over there? They are genderless couplings that lock with a quarter turn.

The township I volunteer in uses NST threads as does most of the country. One of our neighboring towns uses NYC threads, not sure why but they do. We had a fire in a remote area and were setting up a tanker fill station at the water treatment plant for our neighboring town, which happened to be in our town, and couldn't figure out why we couldn't hook up to the hydrants, they were kind enough to install their own hydrants in the plant, not that big of a problem because we carry an adapter, but still threw us off for a bit.
JCooper,

Quote
do you guys have stortz connectors over there?
Yes we do, but they are more limited to Rural firefighting use.
Sorry there actually is a thread in that particular picture.
That "Combining Breeching" to the lower left of the pump panel, unscrews and has a 150mm dia thread to take a Suction hose.
I've carried what seemed like a 55 gallon drum of fittings around. Literaly one high side compartment filled with them, and we were standardized, except:
The vetrans home that had 4 1/2" hydrants.
The old sections of hydranted area that didn't have Stortz hydrants.
The National Park Service tankers that for reasons I will never understand only had 1 1/2" discharges.
The few 2x 2 1/2 only hydrants left at the research farm.
Relay pumping the above ground water main. (We carried 1500' of 5" on each engine, and had 3.)

You get the idea, and the list goes on. This was a small department.

This is a wet hydrant: 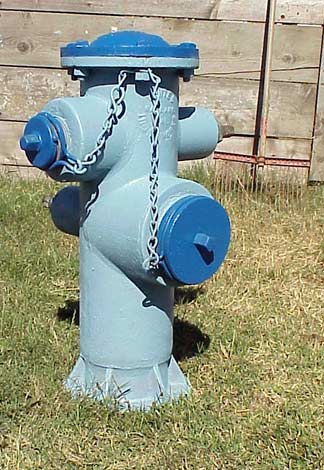 This is not the correct technique:

The correct technique is to get behind the BWM and push it clear with the engine. It can be done. Park infront of a hydrant in Chicago for a demo.
BMW does stand for "Break My Windows". ::smile
bentruler,

So I guess my question is, where was that cool blue fireplug photo snapped?
A question for Bentruler or one of the other firefighters on here.

Why would a fire department take the time to break the car windows to lay the line to the pumper instead of laying it over the trunk or hood?

I would think that the movement in the hose as it fills up would scratch the paint and be punishment enought for the idiot for parking there.

I saw the windows being broken and the hose run through being done in the movie Backdraft and thought it was just for dramatic effect.
mbhydro,

Quote
Why would a fire department take the time to break the car windows to lay the line to the pumper instead of laying it over the trunk or hood?
That's a really good point there mate!.

Personally, I'd be asking the question as to why it wasn't just run under the vehicle?.

I'm not looking to pour any doubt on the authenticity of the photo, but I reckon that the rear window was broken from the inside of the vehicle, judging by the glass on the road.
If that's the case, when the window on the pavement side was broken, why didn't they just open the doors?.

I like the look of that 2-tone blue Hydrant,
this could start a trend of custom decorated Fire-fighting equipment.

Trumpy (and others):
The movie "backdraft" was little more than a collection of every Chicago firehouse tale and fantasy. When Chicago FD encounters a car parked in front of a hydrant, and they need to use it, the firemen fight over the right to be the one to smash the glass!
Chicago, btw, has its' own unique hydrant thread; all the area towns use ANSI pattern.

Car side windows are made of a glass that is actually under tension; when it breaks, it 'pops' as if exploded, in every direction. It doesn't matter what angle you strike it from.

Another few examples of Chicago parking rules enforcement:
- park in the wrong place at the train depot, and you will return to find your car freshly painted in transit company colors; and,
- In the winter, park in a space someone else has cleared, and they will wash your car.....several times...until there is an inch or more of ice on it!
The photo was somewhwere in CA. I took it of some website. (It's actually from the URL in the pict, I just linked it.) Everything here is drybarrel.

Having sholved a few of them out of snow plow banks, the idea of having a hydrant in a vault in the street has some merit.

As for the why through the car? Well, the 5" has a mind of its own when charged. You try to reduce the bends as much as you can. Standing next to a coupling is great way to break your foot, I've seen them hop.

Of course, at this point everyone just wants to be like Backdraft. I haven't been on the job for about 5 years, but that was back in the midwest and I learned from someone with 20+ years on CFD. Some of the stories he would tell...

Oh, and CPD will tow your car no matter what. Saw them tow a radio station's remote van. Live. On the Air. With the boom up. It did say "No Parking."
In my town, the plugs are tartan, to reflect the strong Scottish heritage.

[This message has been edited by classicsat (edited 01-24-2005).]
I've seen worse than that before, one day coming home from work (really rainy day), i observed a huge gusher of water coming from OUT of a local utility pole! Wish I could have taken a picture.
© ECN Electrical Forums