ECN Forum
Quote
Is it OK to place receptacles over baseboard heaters? 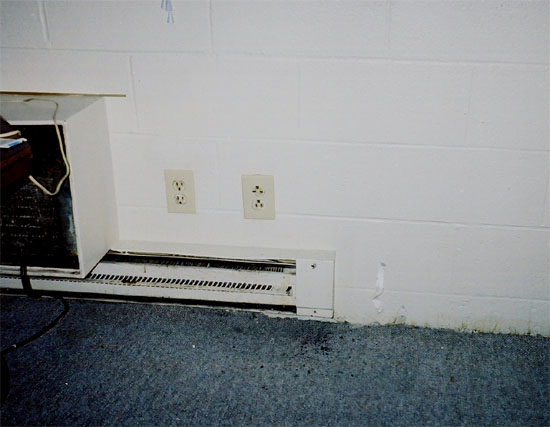 Good question John,
The question I'd be asking is,can a cord running over the top of a heater like that, handle the vertical heat coming off of a heater?.
What would the temperature be?.

One of those outlets looks to be a 240 volt one, likely for the "window" A/C unit in the picture. That should make nice fireworks when the cord melts.
Looks like this installation is 20 years old. No such rule/regulation existed back then.
I wouldn't have thought having that A/C unit right above the heater was a good idea either, if only because it will restrict the convection from the latter.

On a serious note though, why are the grounds down on the left-hand receptacle and up on the 120 and 240V right-hand ones?

When do you have the heat and A/C running the same time?
OK, guys, time for me to tell "the reat of the story."

This pic is from a hotel near the "downtown" of Reno. It will soon be demolished to make room for a new bus station.

The rule "no receptacles over heaters" is alluded to in 210.52. As this hotel is well over thirty years old, it is very possible that the code did not address the issue. As Trumpy suggested, there is a concern that the heat coming out of the unit might damage cords.

One of the receptacles- the one nearest the air conditioner- is a 'normal' convenience receptacle. The receptacle to the right, however, is another story.

But I would not suggest using it like this.


Quote
The 120 part, where active (not every room is) is powered from one leg of the heater circuit, and uses the conduit as a "neutral."
Saw one of those on eBay recently.
Also if my eyes are good, all of those receptacles seem w little scorched.


Ian A.
If I blow this picture up a little bit, the receptacle looks discolored but not too much right near the screw(s), more so on the face of the receptacle. Might just be 30 years of grime.

Pauluk - my guess on the grounds up on the receptacle on the right is maybe the molded plug for the window AC cord is made with the ground up when it hangs down. Maybe? I've seen similar ones but I don't know why they make 'em that way.

Radar
Could be that I guess. Years ago (before I'd ever been to America) I had a "bargain bundle" of cords and such like from a mail-order place, and along with the dozens of light-duty types I wanted for my 120V projects there were also a few heavy SO-type cords. I remember finding some with the 5-15 plugs molded ground up and some ground down.


[This message has been edited by pauluk (edited 01-14-2006).]
Installing the receptacle above the electric baseboard heater is not directly addressed in the NEC, there is an FPN. Also 110.3(B) is where we want to direct our attention.

I went online and downloaded several electric baseboard manufacturer's installation instructions. The language used is " do not install the baseboard heater below receptacles. (paraphrased)


I did find one manufacturer that had no reference in their instructions in relation to location as to receptacles.
No matter what the regulations say, common sense says that those receptacles shouldn't be there.

Whoever installed the heater should have removed the receptacles and vice versa.

If you think that's easy, what would you find difficult?

Academic anyway, reno says the buildings' due to come down.
Woops ! I meant it would be easy if the wall wasn't filled with concrete. Which it probably is.

In which case it means you just need to do a heat-proof junction and then cut a chase in the block wall up to the new Socket location. Then either cut and chisel out a wall box or mount an ugly surface socket.
Then plaster up the chase. See, easy huh ? Half hour job at most !

Quote
In which case it means you just need to do a heat-proof junction and then cut a chase in the block wall up to the new Socket location. Then either cut and chisel out a wall box or mount an ugly surface socket.
Then plaster up the chase. See, easy huh ? Half hour job at most!
Dynamite...

Ian A.
kiwi, I'd love to have you on my next cinema install!!

ROFL!
Any "scraping" connection creates some heat at the surface area from the plug and socket contacts.

Additional rising heat from a heater below, will cause the heat to dissipate more slowly from the connection and will add to the deteriation process of the plug and socket and possible premature faillure.

Also the heat on the lead of a plugged in appliance will soften it, add to the resistance of the lead, hence less voltage for the appliance.

There is an other risk of the lead touching the actual heater and early insulation faillure or flashover to the 'hopefully' earthed heater.
I think it was LK, [Les], who mentioned, in reply to one of my first posts to ECN, an assumed upper limit of 60C at recepticles? This raises an important issue, irrespective of the impending demise of this building, because most central heating systems, [with the exception of underfloor], operate at higher than 60C.
Are there any rules that an electrician can follow as to how near hot pipes/ ducting/ radiators/ ancilliary kit the wiring can be without derating?

PS 3xelectricman; Not dynamite any more, now its 'PBX' ( Plastic Bonded Explosive) - It's more environmentally friendly apparently- the mind boggles!!!]
PPS; I changed your name, after some of the best posts of the last few weeks, I think you deserve it!
© ECN Electrical Forums