ECN Forum
Quote
I am a Licensed Journeyman Electrician living in Colorado. I live in a condo and our association hosted a walk through last week to discuss items needing repair. I pointed out the following and our manager dismissed them either as not being a priority or too expensive to repair.

This particular photo shows a lighting repair made in a carport. It would appear the grounds were removed from the romex cables, and the junction box left open. 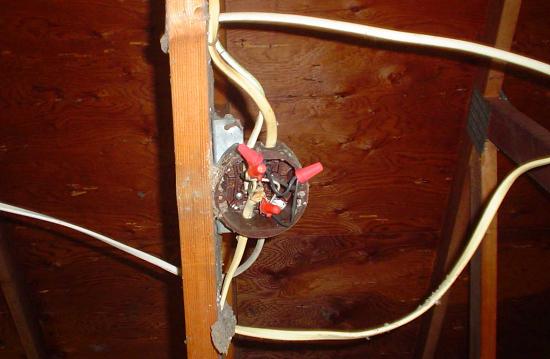 Quote
This photo illustrates schedule 40 PVC used to energize light poles. It would appear the PVC is at a burial depth of only 4 inches. 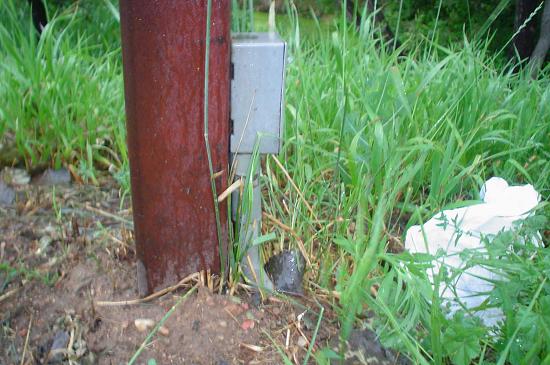 Quote
This photo illustrates the improper use of non-metallic cable, a similar method used throughout the complex, more photos to follow. 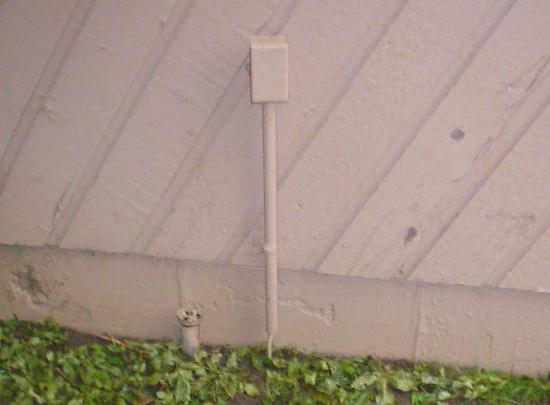 Quote
This picture shows a disconnect for an air conditioning condenser no longer supported. It is held in place only by the conduit attached. 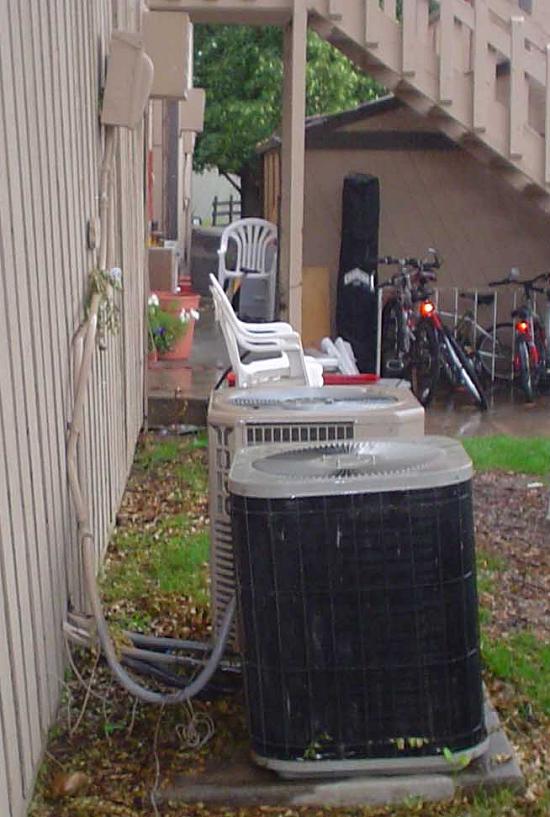 Quote
This photo shows another problem with the air conditioning condensers...adequate protection to ensure cars aren't running into them has not been provided in my opinion. 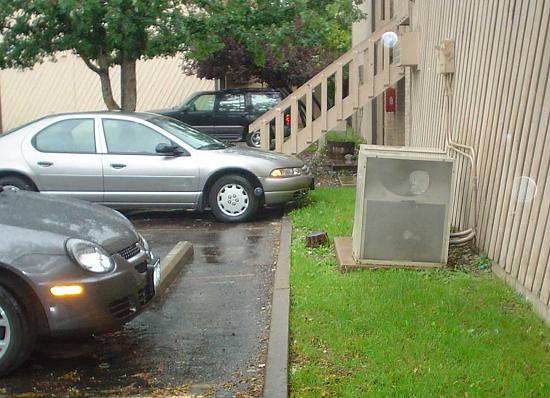 Quote
The attached series of photos show how we treat transformers. This transformer has been struck several times and is moving from the pad closer to the building each time. 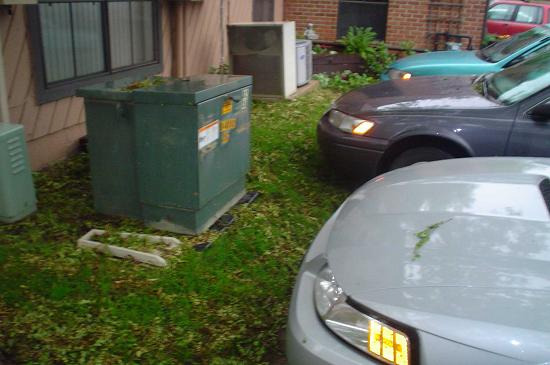 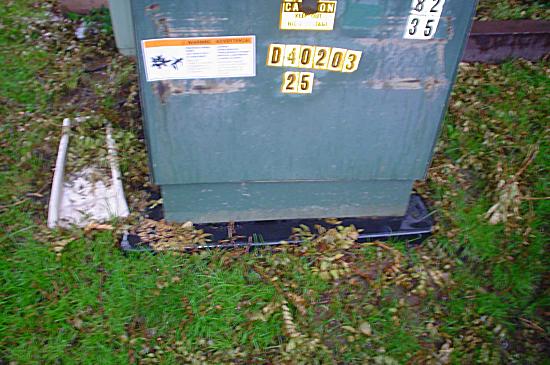 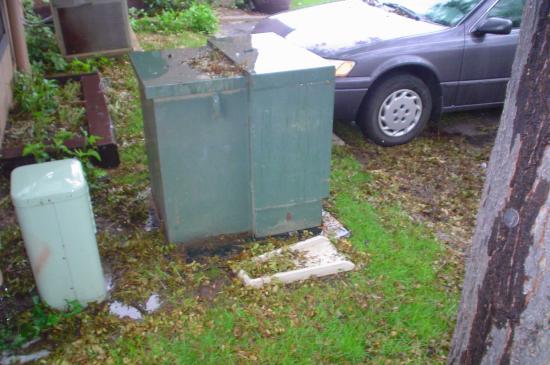 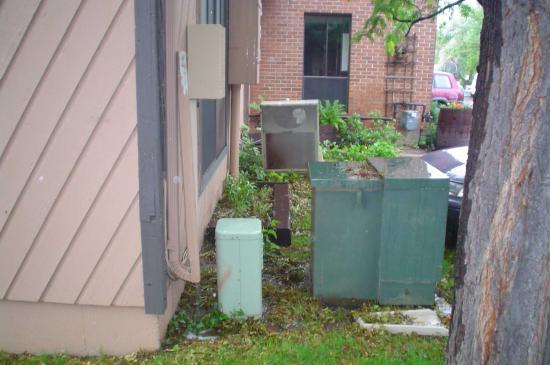 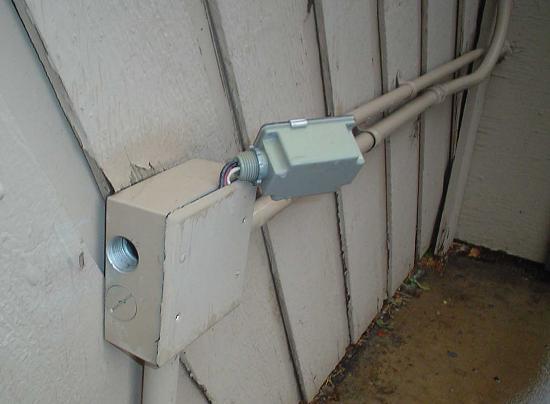 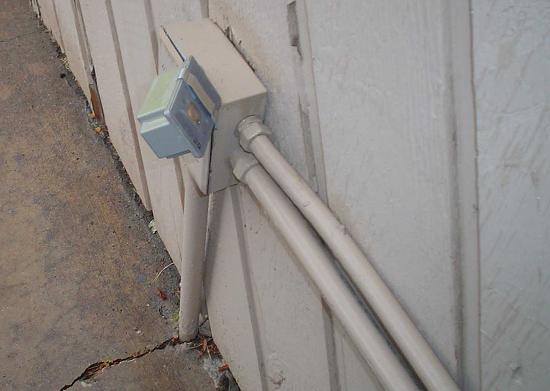 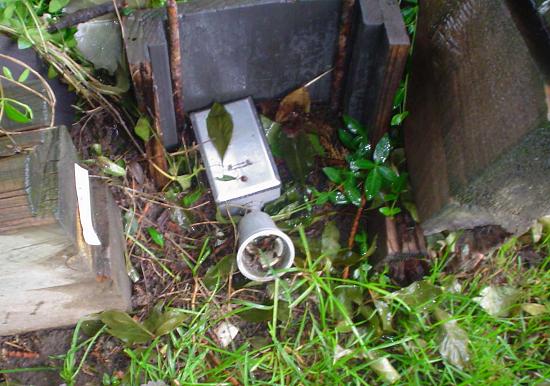 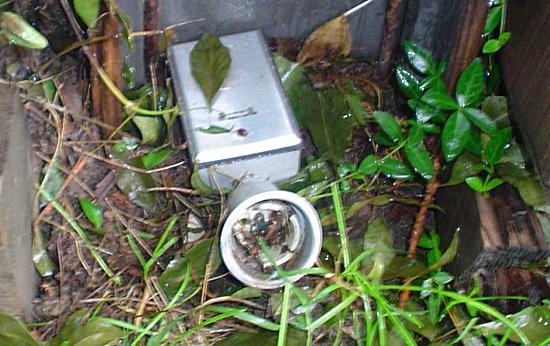 Thanx for posting the pictures. Hope there's a good insurance policy to pay off the parents of the kid that tries to catch the bug that crawled into the lite socket or the car and driver that start on fire when their car hits the pad-mount and the primary arcs. The power company might set some barriers in front of their equip for free. The inspector hopefully can force some action while explaining the dangers. The whole thing seems like an accident waiting to happen. Hope it isn't somebody you care about.
My favorite is pic #1. Maybe the ground wires "needed" to be removed to mitigate nuisance tripping of the circuit breakers!

Like in Texas, where "He needed killing" is valid justification.

Radar
Anyone else suffered through a similar problem before? The manager became defensive after about the 2nd item I pointed out, I guess I will address the homeowner's board from now on. They were asking me to prepare a report, I doubt they will pay me for a prepared report so I was going to direct them to this website in a couple of weeks.
Looks as though there were many, many shortcuts taken during the building and later "maintenance" of this place.

The wires fed through the box lid in pic #10 are incredible!
Good Grief! Is this what all the HOA fee's are paying for??

Hard to imagine the Poco there not thinking bollards should be in front of the pad mount transformer... I wonder if this parking lot was expanded/altered to add parking & they might've been removed by a paving contractor... The open light socket is certainly temptation to curious fingers...

Anyone who has allowed all this to exist in the first place will usually not care to fix it until there's a sheriff at the door serving them for someone getting hurt!

-Randy
Quote
...Our manager dismissed them either as not being a priority or too expensive to repair.
So the integrity of the building and the safety of it's occupants isn't a priority? Swell guy.

-John
I'm amazed the POCO would allow transformers to be there without bollards. Never happen around here.
IMHO, as an electrician living in the condo complex, you probably have a couple of political problems that you will have to address.

1) You might be seen as having a conflict of interest, pointing out 'problems' to drum up business for yourself. After all, these things that you've been pointing out 'have been working fine for years'.

2) If you do convince people that there is a problem, you might be expected to volunteer to fix them at cost.

3) Some of the problems that you point out are not immediate safety hazards, but poor workmanship that will _potentially_ lead to early failures and safety hazards.

The shallow buried sch 40 conduit, for example: as long as the conduit is not broken, then the install is safe...but by not being deep enough and not being thick enough, it will be prone to breaking. These are also the problems that will be most expensive to fix.

The list of things that you find will need to be prioritized, and in some cases probably won't get fixed. Does the NEC apply in your area? You might not have the legal backing to get the poor workmanship fixed.

Good luck! I certainly would not want to live there, and you might point out to the condo association that these clearly identifiable safety hazards suggest poor property maintenance and probably depress property values.

-Jon
I just "toured" my buddy's new house for the first time last night. He wants my opinion of the electric. (Why not ask BEFORE you buy??) House is 63 years old, with original wiring and 8 fuses. OK, that looked safe, if a little old. Go outside to look at service - meter is rusted badly, with some small holes present. Feeder from meter runs along outside of house for 20 feet or so. Feeder is badly deteriorated, with almost no insulation left, shield around cable loose and falling off - bad. Easily the worst deterioration on a cable I've ever seen. Tell him it needs to be replaced - probably $850 or so for a new 100 amp service with a 20 breaker panel. ANYWAYS.... the point is he got mad at me for telling him about it. Can't afford it, just bought a house, blah, blah, blah. Like it was my fault.
Kinda ticked me off so later I ask him about the batteries in the smoke detectors. He asks why. I say "cuz you're gonna have a fire soon and I want you to live through it".
these pictures show the results of those who want to shave every nickle they can. The condduits too close to the surface may have been a shovelful deep but now the ground has settled. the same for the UF now exposed. the rest show careless and cut corner construction and lack of maintence. How the inspectors in your area allowed the transformers and compressor units to be so close to the parking lot, to me shows either no inspections or lazy inspectors.

IMHO prepare the report and tell the home owners association to hire a electrical contractor other than your company to eliminate conflict of intrest. Also that will hopefully stop them wanting you to fix this junk for free. Also I would call the local POCO about the transformer.

Good luck
Quote
Anyone else suffered through a similar problem before? The manager became defensive after about the 2nd item I pointed out, I guess I will address the homeowner's board from now on. They were asking me to prepare a report, I doubt they will pay me for a prepared report so I was going to direct them to this website in a couple of weeks.

Good luck! I had a customer with some of the exact same issues as you have pictured. I had a hard time getting them to fix any of the violations. They think as long as it's working it will be just fine. You can talk until you are blue in the face, but it is real hard to get them to spend money to fix something that in their mind isn't broke. What finally got my customer to spend some money was when the fire marshall made a suprise visit and wrote them up on several violations, then all of a sudden they had some money to spend
Manager not interested! By the looks of these pic's, I would push for regime change!

As for that Transformer, it is just wrong! I would go over this "Mangers" head on that. Fixing alot of this stuff might push your HOA fees up, but so will the indefensable wrongfull death suit!

I can't imagine the ground on that tranie being in great shape. And I don't want to imagine someone knocking it back enough to make contact on the primarys. If the transformer doesn't go off like a bomb, the person getting out of the car does! I'm sure the person who lives in the unit behind it wants the equivelant of 4 sticks of dinomite waiting to blow out side thier window!

Joe, or Scott, I know you're out there watching... Could you link us up to some of the high voltage victems of the range of this type? Some Trannie explosions too, please!

[This message has been edited by e57 (edited 06-24-2004).]
I emailed our utility company (xcel energy) last night about the transformers and gave them your website address to look at the photos.
Why not get the insurance company to have a look at the photo's on the webb site, I am sure that they would be interested!
Trofer,
What a mess!
A Colorado E.C. here out of Highlands Ranch. Nice to meet you, or, maybe we have met.
Looks to me like your missing quite a few of the stop blocks in the parking lot including the one in front of the xfrmr. If you don't get a response from Xcel you may want to call them and find out who the rep is for your area and give the rep a call. Electrical Inspectors here are going to leave it up to Xcel. I think the only thing Xcel will do is write a letter to the building owner or association since they do not install stop blocks or bollards. GOOD LUCK.
Kent
You're right...haven't heard back from Xcel yet. I'm not a contractor...just a JW electrician. Thank you for the suggestion of finding out who my rep is. I think the transformer is the most dangerous issue we have.
© ECN Electrical Forums