ECN Forum
I remember when in Southern California, (SCE territory) seeing most polemount distribution transformers hooked between two phases rather than in wye (one phase to ground/neutral) on the HV side... can anyone tell me why this is? Is it just a preferred method, or is it to do with ground fault detection being possible on such a network, to detect downed lines during a 'quake maybe?

This has been bugging me for some time so I thought I'd ask the experts. Also, does anyone know of any sites with details on the internal construction of polemount transformers as used in North America? Originally being from the UK, the round style is still somewhat unusual to me, and I was wondering what type of core etc these things use

The question is sort of a can of worms. There are no easy answers for there are many electric utilities in North America, and almost as many standards. One “committee” description is ANSI/IEEE …Application of Neutral Grounding in Electrical Utility Systems, Part IV—Distribution described at http://standards.ieee.org/reading/ieee/std_public/description/surge/C62.92.4-1991_desc.html Abstract: “The neutral grounding of single- and three-phase ac electric utility primary distribution systems with nominal voltages in the range of 2.4–34.5 kV is addressed. Classes of distribution systems grounding are defined. Basic considerations in distribution system grounding—concerning economics, control of temporary overvoltages, control of ground-fault currents, and ground relaying—are addressed. Also considered are use of grounding transformers, grounding of high-voltage neutral of wye-delta distribution transformers, and interconnection of primary and secondary neutrals of distribution transformers.”

SCE is a good example of a utility having various distribution-grounding implementations. For years, there has been a lot of ungrounded-delta 4800V, but also plenty of more modern 12,000V and 16,500V {and up} solidly-grounded wye circuits. Systems that are solidly grounded do not automatically have phase-to-neutral-connected distribution transformers.
Thanks for the quick response and taking the time for the references, I have a bit of reading to do... LOL, although the use of UNgrounded primary distribution in itself probably answers my original question

As you'll know, in the U.K. we don't distribute a neutral on HV lines at all, so transformer primaries are always connected phase-to-phase.

I don't know how long you've been out of Britain, but the circular types have started to make an appearance over here now: 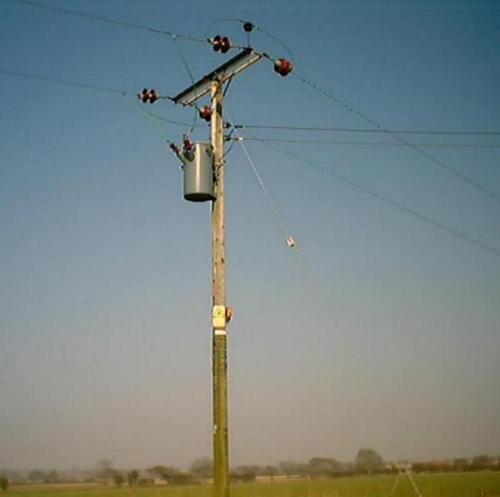 [This message has been edited by pauluk (edited 07-21-2004).]
uhhh... is it me being colo(u)rblind again or are the secondary (LV) cables coded black and white at the termination to the insulators?

Paul: I have been in North America since late 1999, I was originally from Southampton, and I find it interesting that the PoCo installed single o/h cables, Southern Electric spent most of the late 90's replacing its LV o/h network with twisted wiring, one SE engineer told me "the Irish have been using this for years, they told me it faults in a few years and they're going back to single wires"... I don't know the truth or not of this, they seem to use it here in Canada and in the US with no problems... maybe a different insulation?... I know the UK stuff doesn't have the bare neutral/ground, but other than that it looks similar
I can't say I noticed the black/white on that photo before, but I see your point. It's just the way the splices have been made though.

Twisted pairs are used for a lot of replacement overhead drops these days (at least in my area -- Norfolk), but there are still many older service drops like the opne above in use. The house that transformer feeds is an old one, not newly built, so it's likely the transformer is just a fairly recent replacement which was linked to the existing single service cables.
© ECN Electrical Forums