ECN Forum
We've received this picture of a lineman at work in the Dominican Republic. I'm going to ask the sender if he has anymore details as to where and in what installation this was taken. Stay tuned! 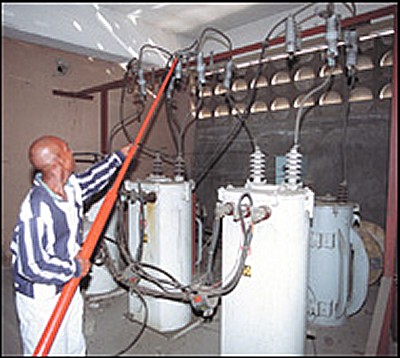 Looks like we're still in the dark about the details. (Excuse the pun, bearing in mind the quote below!)

I thought I'd post the link Joe sent me for those of you who can read Spanish. I can get an odd bit of the story here and there, but my Spanish is far from good.

I don't have any further info on the pic. I saw it in the online newspaper that was explaining how the high cost of oils has caused rolling blackouts when the p/plants are shut down to save money. Here's the link; http://www.listindiario.com.do/antes/080902/welcome.shtml

Joe
From the service at http://babel.altavista.com/tr a literal translation

"The prices of petroleum will influence in the adjustments of the service Administrator of CDE reveals became will estructurá of the cost of the service. SANTO DOMINGO. - The general administrator of the Dominican Corporation of Electricidad (CDE), Caesar Sanchez, revealed yesterday that the government will authorize an increase of the invoice by consumption of electrical energy and will retire the subsidy of 400 million weights that pays monthly what it has avoided, until now, which the prices of the service go off. Sanchez informed that president Hipólito Mejía will speak in the next days to announce the measures."

Well, I did say literal!

[This message has been edited by Hutch (edited 09-13-2002).]
Pretty good for an Internet translation. I've seen some far worse.
"Dear...
e-mail your hope received..." can't remember what followed. It's a mail some friend in NYC sent to me and had it translated into German. I tried to translate it into an equally bad English.
Received by e-mail:


Quote
I am a dominican mechanical engineer licensed in the state of New York. This is the first time I get to this forum and found this to be the first picture. Even though I've been residing out of the country (DR) for several years now, let me tell you that situations as depicted in that picture are not at all strange in my country.

Our country is one of the greatest end users of telecommunications technology, (which has allowed the country to be in the top 20 countries in the world in this area, but this is another story all by itself), but when it comes to industrial safety, it is something practically non-existent, with very few exceptions like american companies established in the country (and that only because these are well recognized companies that are audited by american institutions like OSHA and FDA on a regular basis and other federal agencies).

On the other hand, I don't think there is any law requiring employers to provide safety equipment and / or training to their personnel. The general attitude is that you'd better take care of yourself or else.

Hopefully, someday we will realize the importance of this issue and maybe our leaders will get illuminated by God, Allah, Buddha, the Force and all the Saints of the universe (all acting at once and at the same time, of course) and they will do the right thing instead of taking the juicy bribes, ahem, I mean, instead of not doing the right thing.

Allen Guzman, P.E.
Scary looking where do you even start?

It seems very weird to have what look like pole mount xformers mounted anywhere other than high up a pole. Surely they should be using pad mounted units?
The LV and MV connections look rather scary too.

He is not insulated, no safety gear, no protection from arcing / flashing and OK, I don't know much about line work but I can't see how poking that with a stick is going to achieve much.

Is this kind of stuff common around the world?
what does he do with that stick at all?
Actually, he looks pretty good. We had a very similar set-up at Lorton prison not too many years ago, except the manholes they were in were not NEARLY as dry, and we used old wooden sticks. Safety gear was a pair of gloves, and if you were smart, a pair of ear muffs (have you ever HEARD a fuse blow close up?????).

We did upgrade not too much later to a lot better equipment, but we had several of the original 1920's style vaults until the day they closed.... as a matter of fact, they still exist, de-energized.

Maybe I'll get permission to take a pic one day shortly.
Isn't that orange pole usually what is called a "hotstick" and used for opening and closing the huge knife switches at power stations and other places like that?
Sven,
The orange stick is a hot stick, mine is good to 70 kv. I may have time to take a picture of my hot sticks this weekend, I have one of the old wooden sticks we used to use, I just got a short one called a "switching" stick, but it is the same beautiful walnut.
© ECN Electrical Forums