Hi Guys,
Sorry it's been a while, but I would like to design a device for testing PC boards in dairy sheds I do a LOT of fault-finding in.
Now I have most of it all sorted but the one thing I can't get through my thick skull, is how I'm going to power this tester (which will in turn power the board under test), it needs to have a solid 25.5VDC to the board and I was thinking batteries, but this thing needs to be reasonably portable, sure, the current draw from something like this won't be any more than about 200-300mA, to power the test solenoids.
Sure, SLA batteries could be an option, but I've never heard of a battery that has any more than a 24VDC output.
I was also thinking a switch-mode PSU inside the box (that I want to keep as small as possible, if I can) but then you'd have to have 230VAC to the box, which isn't intrinsically a problem, but it affects the portability of the thing.
Any ideas?
Posted By: gfretwell

Google up DC/DC converter. That is basically a switching power supply with a DC input (battery?) and then outputs DC at a different voltage. Like a laptop power supply.
Posted By: geoff in UK

How about one of these? I know the Chinese suppliers get some bad press, and I would be very cautious about anything mains powered, but I have had a few electronic modules from here and found them perfectly OK. Cheap enough to experiment with too.

This is what I use:
http://www.mpja.com/XL6009-Adj-5-35V-DC_DC-Boost-Converter/productinfo/31397+PS/
They also have one with a built in meter:
http://www.mpja.com/Boost-Converter-Adj-4-35V-with-LED-Meter/productinfo/33525+PS/
I know it doesn't make sense for you to order from an electronics supplier in Florida, but I would imagine that you have similar suppliers there. Mine is added as a boost supply, to make a standard PC supply, useful for my bench. You might consider adding one to an R/C Li-Po battery or USB power bank. 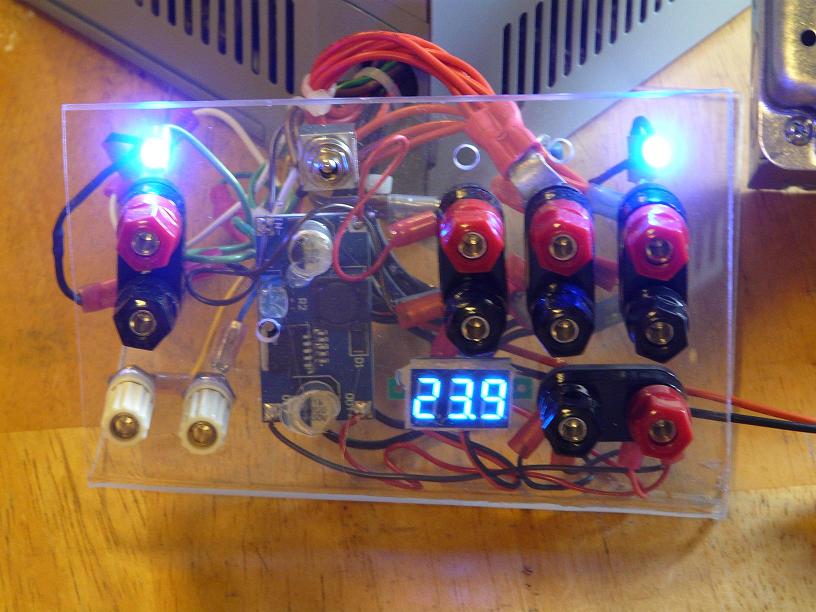 Woah! ,
Hey thanks guys, it's been a while since I've worked with DC-DC converters, but it's given me something to think about though!
Will let you folks know how I get on and post some pics of the finished (prototype) tester.
Posted By: Trumpy

JoeTestingEngr,
It's a shame that Marlin P Jones don't ship to NZ, because the first one you posted looks exactly like what I'm after.
I've searched all the local places here and all they have is nothing I want, it's all like boost 5VDC to 12VDC, which is not really what I'm after.
Posted By: twh

The shipping is slow.
Posted By: JoeTestingEngr

I think you're good to go, Trumpy!
http://www.ebay.com/itm/like/121623601859?chn=ps&dispItem=1
I also found them at All Electronics and they ship overseas. Better still, just Google "XL6009 Module", and you'll find them all over creation. I just double checked mine and it has the older, LM2577 adjustable switcher, in it. The XL6009 switches at 400kHz, instead of 50kHz. You'll probably be able to get yours from where MPJA buys theirs. Just add a heat sink if you start pushing 10W, or if it feels hot to the touch.
Joe
Posted By: JoeTestingEngr

TWH,
The specific item that you linked to is a buck converter. Trumpy is looking for a boost converter. The good thing is that they're available on Ebay, Amazon, and many other sites. I was a little surprised to learn than I could buy 2 for $6.94, with Amazon Prime, and have them on Thursday. I just hope that I never get to the point of impulse buying switching regulators.
Joe
Posted By: Trumpy

Joe,
You are awesome, mate.

I managed to find a place called Surplustronics here that stock these modules, for the paltry sum of NZ$5.50 + freight.
Thanks so much for your help.
Posted By: JoeTestingEngr

Trumpy,
I'm really glad that I was able to help. If you want to keep the size and weight down, please consider an R/C Li-Po battery and charger, as your power source. It's hard to beat their energy density. You can feed your boost converter with the output connector, and use the balancing connector for recharging. A 3S or 4S, 2200mAHr Li-Po would power your tester for several hours continuously. The "T-Plug" in the example is called a "Deans Connector". Other common connectors are called EC-3, and XT-60. I think that they all can handle around 60A, so no issue there. The balancing connectors, that fit into the chargers, are JST XH connectors. Looking forward to seeing pics of your prototype.
Joe
http://www.ebay.com/itm/Professinal-HPB-11-1V-2200mAh-25C-MAX-35C-3S-T-Plug-Lipo-Battery-For-RC-Airplane-/381885651892?epid=21003903922&hash=item58ea289bb4:g:ozEAAOSwQTVV76-P
Posted By: JoeTestingEngr

Trumpy,
How did your boost switcher supply work out?
Joe
Posted By: Trumpy

Gidday Joe,
Sorry I had completely forgotten about this thread, until your reply.

I finally found time to built up a prototype about 6 or so months ago, over a wet weekend here and took it to work and demonstrated it to my boss and the service technicians.
The first question I was asked was "Ohh, where did you buy that from?"

By this stage, it didn't look anything like I had originally planned it to, with small improvements and a couple of extra features added in.
I've since made 4 other of these units, so now everyone has one, apart from me.
I will grab one at work on Monday and get some pictures, I should have done this when I was building them but the thought never occurred to me.

That boost converter worked phenomenally well, considering it cost so little, which shows how far we've come,
I remember a time when anything "special" like this device would have cost you an arm and a leg.
I bought ten of them when I made the other 4 units and I had one on my bench here, I loaded it up as much as I could and thought it would overheat without a heatsink on the chip, but no, the voltage never faltered either.
So it was good news all round.
Posted By: JoeTestingEngr

Great news Trumpy! I've made quite a few pieces of test equipment that the guys at work enjoy using. Not a one of them ever thought that what I made was store bought. Even without pictures, I know your craftsmanship must be exceptional. I can't wait to see pics though. I'm curious if you chose LiPo batteries or some other high energy density source.

I suspected that you would probably get good results with those little boost switchers. I know that if you priced out just a few of the components, you saw that you couldn't build one, without spending several times what you paid.

Did you end up writing a manual for your tester? I love to design/build things but hate writing the manuals. My last gadget was a 19 Cycle Timer / Current Source for ballistic relays. The manual was 6 pages, including descriptions, photos, schematic, and layout drawing. The only fun part was watching the guy's faces, as they were reading the circuit descriptions.
Joe
© 2020 ECN Electrical Forums