ECN Forum
Quote
Had a customer who lost a neutral a while back. Turns out there was some structural work done before he bought the house that and the water and rod grounds were removed – which did not help matters. Maybe they did not know what it was. Transformer can is not grounded either, so unless you have a good water ground you really don’t stand a chance. The next available path is through your neighbors grounding either water, or rods.

Anyway I re-connected the water, but the one rod was not acceptable to re-connect to. So I started to drive new ones, but hit bedrock at 6’. Even hammered a good mushroom on them for a while before breaking out the big gun. A ½ day rental at $45 – a 40 LBS demo/jack hammer with rod driver. Still took two hours to get them in the rest of the way. 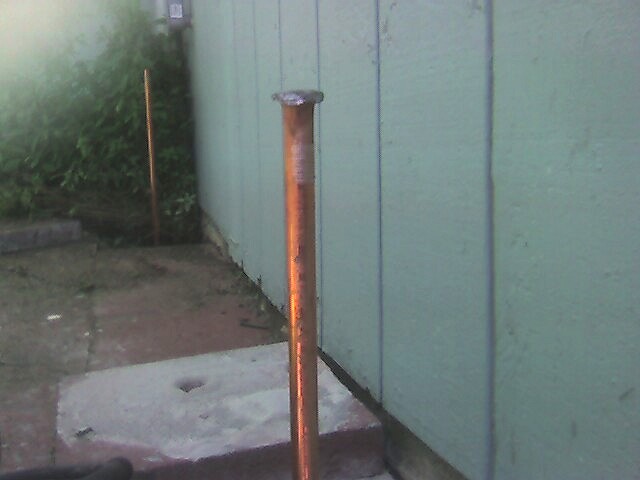 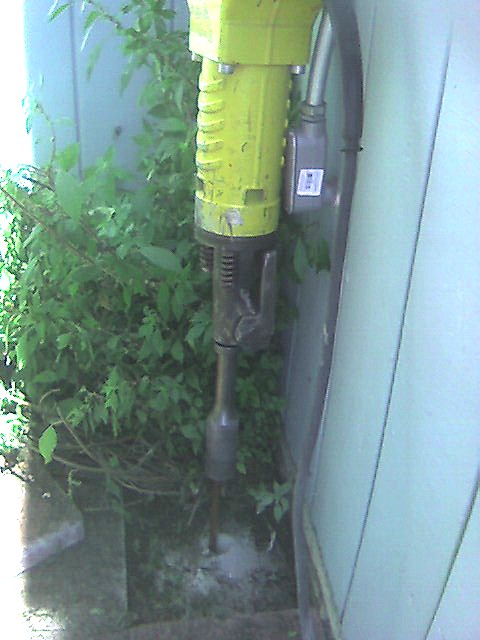 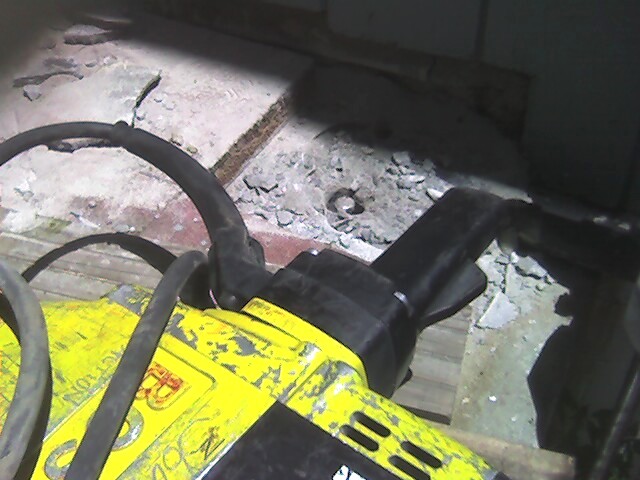 Wouldn't you be better off driving them at an angle to miss the bedrock? I doubt that the copper in the bedrock is helping that much.
Joe
You might not be able to tell from the picture but it's tight area between two/three foundations and a retaining wall. Kind of boxed in a small area. 45 would be hard to keep the distance between them. But the rock is no more or less conductive than the soil, probhably more so. This stuff being serpentine, most of it is ancient compacted soil anyway.

Either way going at 45 degrees can also lead to the same problem very often. Once drove ten rods to get two of them down once. Ended up with 8 steel stubs to cut off.
Sounds like a job for the 32 teeth per inch ground rod driver.

Seriously, would a two foot deep trench be out of the question for the rod to be placed horizontally?
32 teeth per inch? Hack/band saw? Not my style...

Concrete patio all around house on a hill with stair access. Demo hammer much easier to carry up than a ditch witch. I got two pavers up, drilled the concrete mortar and got the 2 rods below it. (2>6' apart, a single rod would require testing - two do not) Trenches (2x8'x30" deep) would be much more work/time, and a fill inspection.
I was just joking about the hacksaw!
I cringe when I come across this problem. Quite a few years ago I was doing some apartments, wouldn't you know it, the rod stopped and I didn't. I knew I just had a little way to go....Then the water started coming out of the ground. Every time I drive a rod it brings back memories of buried water pipes that nobody knew anything about.
Around here, we aren't even allowed to use rods anymore. West of I-35, odds are you can't drive it no matter how hard you try, and east of I-35, you can drive it, but in the summer when the soil dries up, the clay will shrink and there will be an air gap around the rod.

For new construction, we have to do a u-fer. For upgrades (90% of my work), we have to use a plate electrode. We automatically rent a chipping hammer, whether we need it or not.
Here we have to a ufer if there is 20' of foundation or grade beam being reworked.
Over here, 4 ft. rods are pretty much the norm now, but then they're only used in combination with a main GFI, so very low ground impedance is not that much of an issue.

Where I am right on the coast much of the soil is so sandy that I can drive a 4 ft. rod into the ground with just my bare hands.