ECN Forum
(forwarded by Rick Miell)
Quote
"It's a miracle that neither the driver (who had been rear-ended by a drunk driver) nor the small child was injured in this freakish accident on July 8th.

The driver of this car was involved in an accident at a nearby intersection. For some reason, the driver was unable to control the speed of the car, crossed the substation property, went airborne just before reaching the fence line, and ended up wedged underneath the 23KV #79 Line OCB. 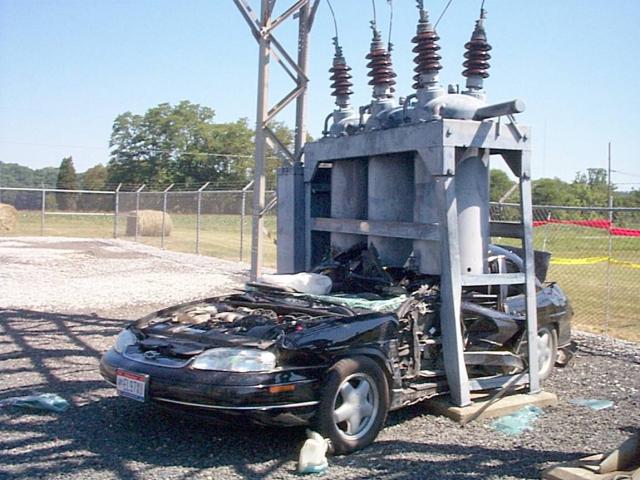 OUCH?!
Blooming Ada, bullseye! The driver must have ducked at the last second.
Is that a white cat by the front tire?
Alan
That is not a cat. That is the car drivers clean underwear (bloomers or nickers) which fell out of the jockey box (glove compartment) when the air bag deployed.

Mom to son, "Did you have clean underwear?"

"Yes mom. They were right there by the front tire."

"He's going to be just fine Mrs Cutout, a couple bruises and lacerations is all. But we had to cut off his underwear- it was absolutely disgusting!"

Several thoughts came to mind with this one:

Being doused with several gallons of probably old and quite nasty insulating oil;

The possibility of a very nice phase-to-phase arc right above my head (of course, IF I wasn't decapitated);

The agonizing wait for rescue until the POCO could get the juice off and everything safe to approach;

And trying to explain this one to the insurance adjuster! (Adjuster: "Your car ended up under a WHAT? Do you have any proof?" ME: "Here's the pic!")

It is indeed a miracle no one was seriously hurt!!

It looks like the two tanks on the left were breached.

DAAAAYYYUUUMMM!!! Someone's seriouly has someone watching over them!!! One of those rare occasions... I'm lost for words!

Yeah, I got the "always wear clean underwear in case you're in an accident" speech from my mom, too.

I doubt that the driver of this car had on clean underwear no matter how they were that morning.
Yikes!

Whoa! They MUST have someone watching over them!

[This message has been edited by Theelectrikid (edited 07-23-2005).]
Somehow this picture has just been bugging me, and I think I've realized why.

The fence behind the car looks completely intact as though it wasn't even touched. Yet the distance between the fence and the transformer bank doesn't look to be all that large.

Or is it just that the angle of the photo is deceiving?

I assume the POCO fixed the fence first thing after the EMS crew left. As if I were the tow truck driver, "Call me when you get that frankenstien looking electrical gear off the car, not touching it till then."

It appears as if the sun could be in two different locations?

No skid marks, which could be explained I guess, and the bent strutcure leaning in towards the driver door, I would think that would bend out if hit, no bend in towards the door.
The skid marks are in that laundry bag by the front tire.
Alan
There are 2 stripes of caution tape (1red & 1 yellow) on the fence behind, and a makeshift post without the carrier for the barb wire top. I think they just patched it.

Absolutely amazing that nobody got hurt.
Paul,

Quote
Somehow this picture has just been bugging me, and I think I've realized why.
I've had the same thoughts.
If the car had come past that fence, with the distance between where the car stopped and the fence, shouldn't the fence be under the rear of the car to a degree?.
Them people in that car want to get a lottery ticket though, that is real luck!.

Both I and my fiancee, who does computer graphic work, have looked at the details mentioned above. We believe the image to be genuine.

The fencing has obviously been patched. The rack leg that looks bent in is actually twisted, caused by the car passing it.

The hood is under the cans and the "cat" by the front tire appears to be the windshield-washer fluid reservoir.
And if the car came through the fence, which we'll say got patched, How did the license plate stay on, the chevy emblem stay on the grill, and most puzzling is the front lights.

How did they not break when it hit the fence and why does the front nose piece not look damaged if it went through the fence also?


Someone got real lucky if this is in fact genuine.


Dnk.....
FWIW, the description notes that the car was airborne prior to hitting the stand. That could explain a few of the oddities.
Having driven under a chain link fence myself, unless you hit the post, you could go through with just scratches on the hood and roof. The wire ties holding it together just pop off. Even hitting a post would flaten most, that way, depending on how stout the post was, you might get away with no damage at all.
It's a windshield washer bottle, which explains the 'cat' having a green tail, well spotted Larry.
It's amazing the detail you miss till others take a look- I had'nt seen the tapes in the background at all.
Alan
I hadn't noticed the tape on the fence either, or that one of the posts is missing the barbed-wire holder at the top.

I did wonder whether the fence had been repaired, but why wouldn't they have had the car removed as soon as possible before patching the fence?
I would think that the rest of the substation would be energized, so if I were in the POCO's position I would fix the fence, even temporarily, right away. It can easily be pulled when it's time to remove the car.

And as for the car, I would think that it would be left alone for the insurance company's adjusters to examine/photograph. (As long as, as it appears in this case, it poses no grave danger. In fact, it may be the only thing keeping that breaker upright at the moment!)

Any chance of a follow-up on this? Did you speak with Mr. Valley?

I'm always real skeptical of this kind of picture but I believe this one.

The proof to me is the way the side door is peeled back by the leg of the transformer rack. I can't imagine finding a picture of a car that fits the rack so perfectly.
If you'd like to take a closer look, I've enlarged the picture

This is for real, I'm convinced.(You can even see the reflections in the rear quarter panel)

[This message has been edited by electure (edited 07-25-2005).]
All good points there. I guess that seeing some of the slick editing that has been done on some "fooled you" photos makes one overly suspicious at times.......

It would certainly be interesting to get a follow-up on this one.
I wonder if they also could be waiting for the POCO engineers to look at it before moving anything. Depending on the damage on the passenger side of the stand there may have to be wood blocking or steel supports made up to keep the breaker from falling over.

Also could there be a concern of oil leaking out when the car is removed and they could be waiting for a Vactor suckup truck so they can suck the contamination up as the car moves out.
Electure,
Thanks for the bigger picture!.

I'm not disparaging that it's not genuine, what I can't believe is how "well" this car fitted into the gap that it is in.
I see in the enlargement that one of the oil drain valves is right where the driver would normally sit.

Absolutely amazing that no-one got injured, let alone killed!.
Paul,
I have to agree, you could pretty much trust most photo's as real, until Photoshop hit town, now it has you guessing.
Aiiii!!!!!

Those people in that car were very lucky that they survived.

It's surprising that there is hardly any oil leak visible from the OCB tank on the grey scoria stones or concrete slab.

It's genuine I believe if you look at the patched up fence with the top wires missing and the twisted OCB stands.

Did this feeder actually trip ???

Let's say image manipulation has been greatly facilitated and professionalized by the advent of Photoshop, but it has been around as long as imagery. Paintings were easy to manipulate, and photo retouche is as old as photography itself. Remember the pictures of Russian government where Trotski has always been retouched out. Only photoshop has made those changes much harder (sometimes close to impossible) to spot. (I graduated on that topic, both theory and a real-life photo edit).
Quote,
e57- "Having driven under a chain link fence myself,"

I'm afraid to ask!
How did the passengers get out? I would imagine the EMS would have cut the roof off the car.

LOOOOOOOL!
But wouldn't an electric can opener be more efficient in tha situation?

I guess since no one was hurt we should be allowed to make fun of that incident _to some extent_!
Larry, nah....we don't need something quite that fancy.

A standard US Army issue P-38 can opener will suffice.
© ECN Electrical Forums