ECN Forum
Quote
I do not belong to any of the electrical forums, but lurk there often observing the codes and pics for discussion. I thought the following pics I ran accross in the last week may be of interest.
Timm Phillips 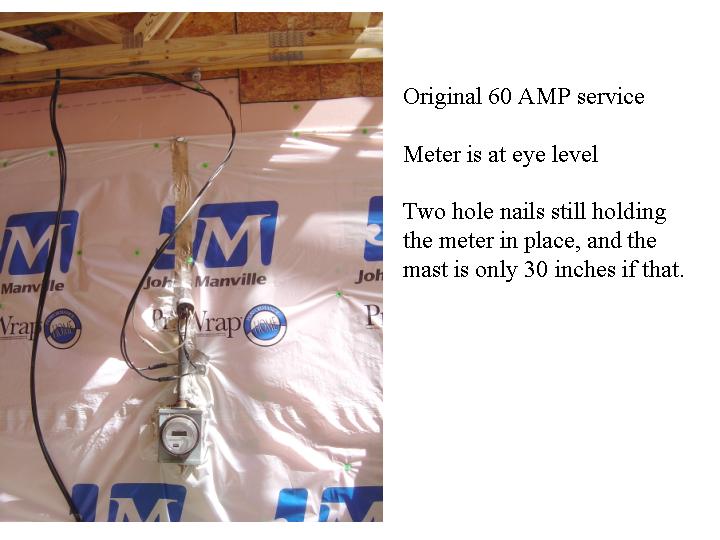 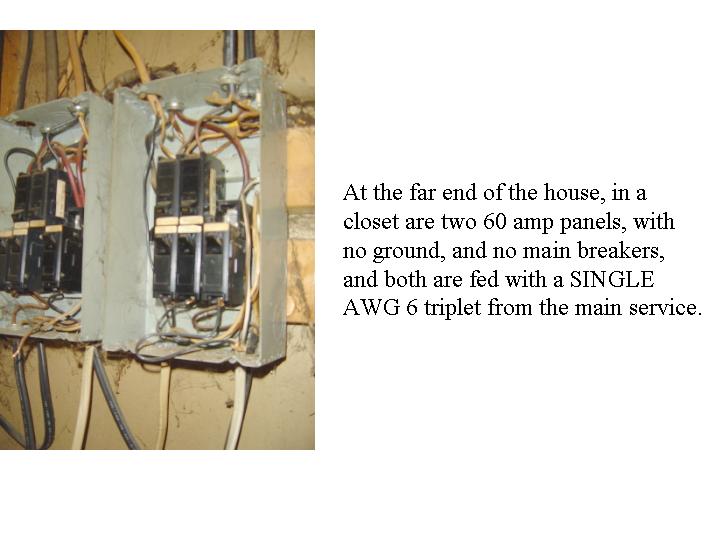 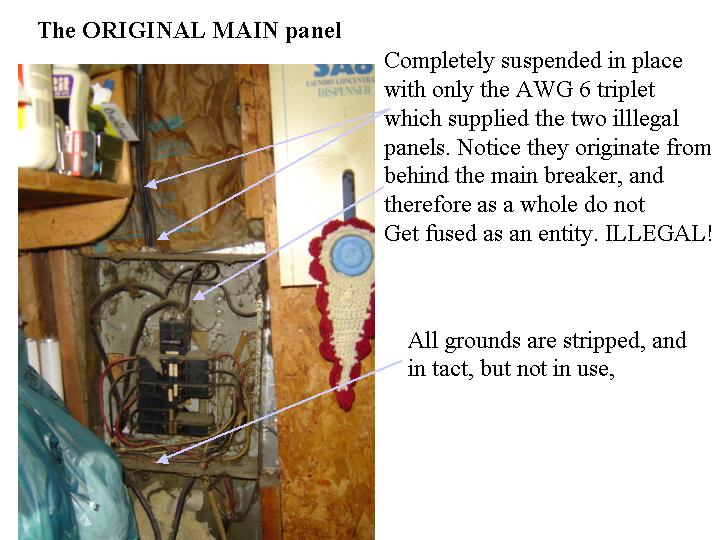 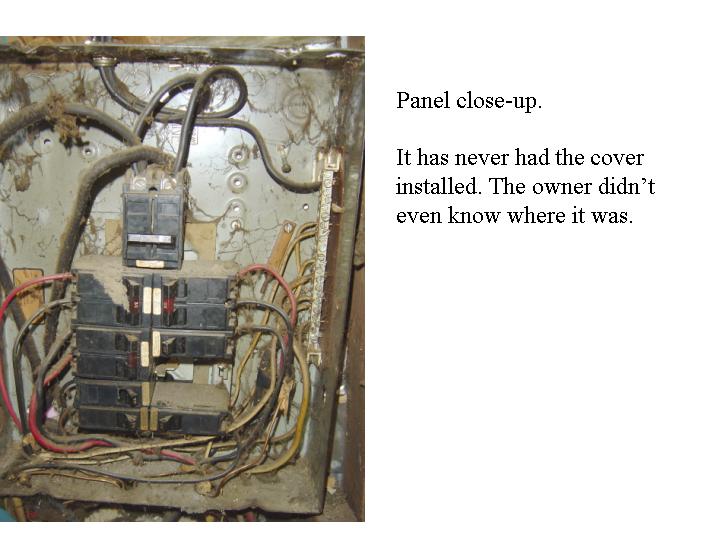 Maybe the cover was left off to provide extra cooling airflow for when the un-protected feeders are overloaded?

Good pics Timm.
Good pics of some pretty sad looking stuff!
The meter & riser are obviously moved for some sort of remodel project, but a 30" riser??? Did the Poco use a telescope to read it, or was the triplex seriously low to the ground???
The rest looks like a nightmare! The main panel, I'd make a guess, you had to move a bunch of stuff to get to.. The spiderwebs & lack of cover usually means this thing wasn't touched for many moons!

(not that you should touch it without a flash suit & face shield!!

)
Cmon & join up Timm! I was shy at first as well, but I've made soooo many friends & contacts since I joined here!! No question too simple, no question too hard! (yet at least!

-Randy
Meter and mast have not been moved, they are in the original position, one that has been in place for well over 20 years.

We are in the process of adding to the river cottage turning it into a home.

BTW...they have had a hot tub that grandpa installed from that far end illegal 60 amp panel stuff. No ground!! But they did have a GFCI on it.
It looked like some sort of horribly cobbled temp service at first.

Once I realized it was a regular service, I'm amazed that the PoCo let it go for so long!

Thanks for the pics!
Here are some more from Timm

One is a pic of the meter on the side of the house as of 18 months ago when the project started.

The other pic is the replacement panel installed at the location of the original mains, after we moved service to the far side of the new garage and made the old panel location a sub panel, It was upgraded to a nice new panel, and we put the two panels at the far end of the house on a 50 amp breaker, and added a ground wire to them (not shown) 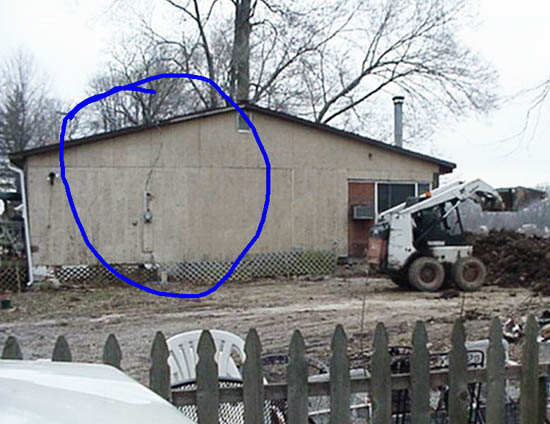 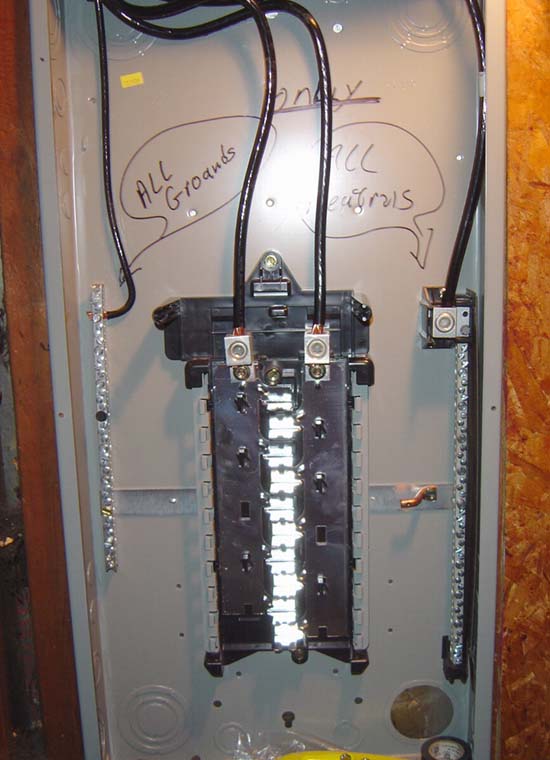 Great pictures Timm. Welcome aboard. This is the friendliest bunch of people here that I have ever met.

I must say like the Neutral and Ground ID's in the back of that last panel shot!
I like to label sub panels like that. I find even lots of electricians forget they are wiring the furnace or whatever to a sub panel.
Hey Timm?
What is that word behind the two phase wires?
Behind the two HOTs is the word ONLY. If I can figure out how to add photos, I will post the sticker I place on the front of each and every sub panel I install. 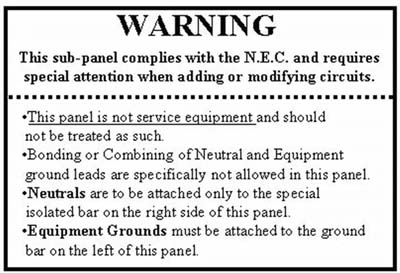 Scott, Send me a Biiiig stack of those in sticker form! I'd love to, for once, go back into a subpanel I installed a year later & not find added circuits with grounds on my neutral bar! I even use the extra long ground bar most've the time so I don't get the "no space left" excuse"! A 225A sub I installed in an office with about 36 circuits & space for 6 more, was ballooned to about 60 circuits with Non-CTL tandems by a maintenance guy!

-Randy
If you have access to an office supply store, purchase a package of Laser Full Sheet Labels, and print as many as your need. I have that label available in Power Point, or MS Word, or as a standard JPG. Send me an Email requesting it I will try and get back with you.

Happy to help.....Timm
ONLY. Sorry it took so long, LOL
© ECN Electrical Forums