ECN Forum
Quote
Here are some photos of some poor services. 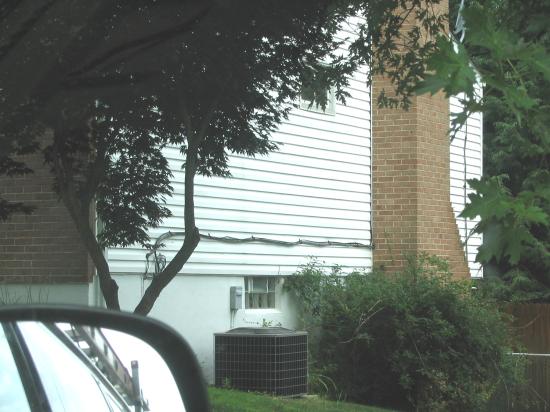 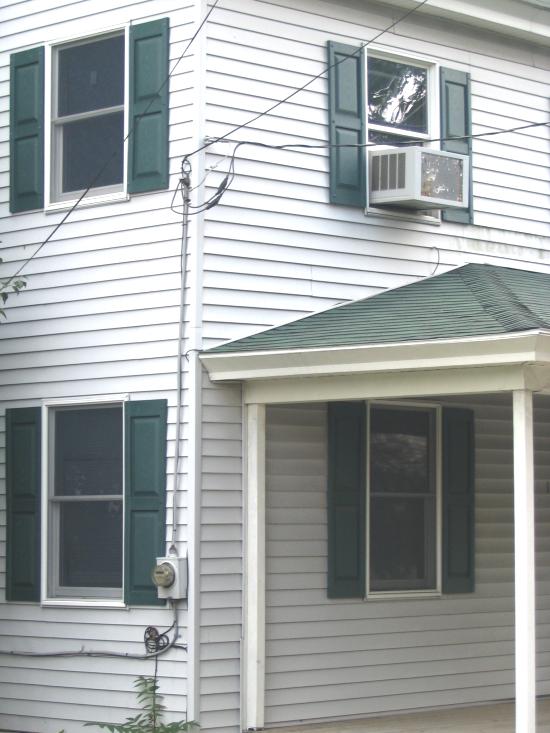 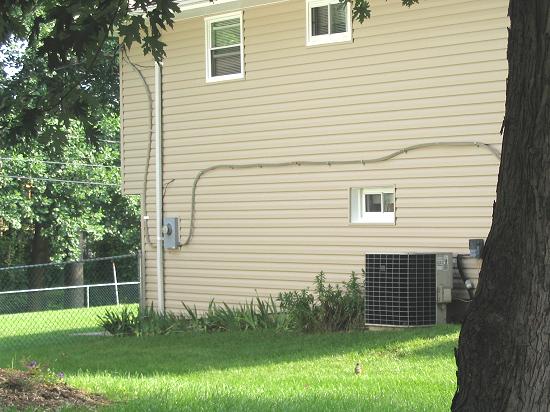 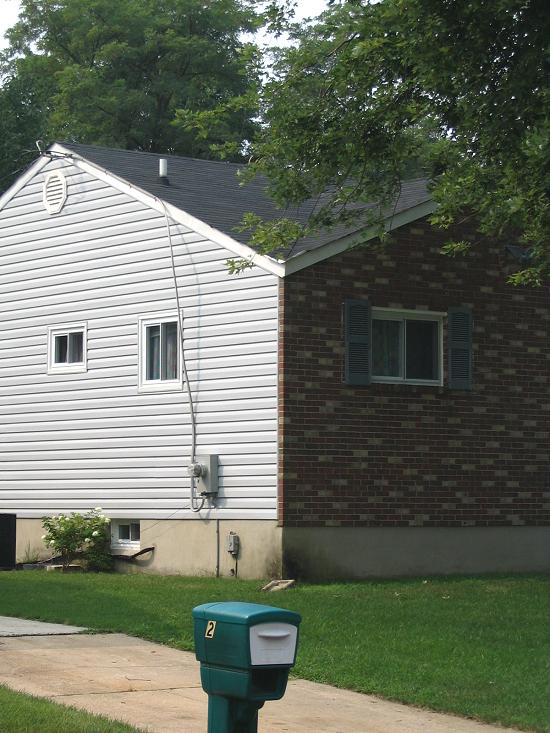 Jim, these look awful.
What does a neat job of this cable look like?
(And for once, I'm not just being sarcastic)
We don't use it out here in SoCA, & I honestly have never seen any.
I can't imagine anyone wanting this stuff run on the exterior of their home, but I guess it's all in what you're used to seeing.
Could somebody send me some pictures of some nice ones to post?
Jim, I agree with Electure.

Who (or does anyone) inspects these installations?

Roger
The cheesy wireing goes along with the cheesy vinyl siding.
I don't think any electrician is to blame here, although the bottom pictures shows a less-than-preferable way of entering the meter socket.

The common element here is the vinyl siding. These cables were more than likely resecured (or not secured at all) by the siders who couldn't care less what the cable and service look like.

Cable is the preferred way of doing things here in the northeast, and all too often it is the victim of a siding crew.

[This message has been edited by CTwireman (edited 12-08-2004).]
Yes, most of these were inspected at some point. The siding jobs may be the cause of some of these. Although the weatherhead was not set below the window by a siding crew.

The first pic shows the cable run through the chimney.

As for the way the cables enter the meter socket the local POCO will not allow any cables to enter the top or back of the socket.

In the second pic, are those joints in the two
wires leading into the weatherhead?.
Them siding guys have a lot to answer for, if it was them that did this.
The wiring's so crooked, you'd almost think a lawyer had done it.

You know, one has a tendency to think everyone has to do it the way its' done in your town! These pics are proof of that!

The service drop is governed by the rules of the utility. Here in Reno, all our overhead drops come into the top of the meter enclosure, through 2" IMC (or RMC). The meter pretty much has to be directly below- none of the service "lateral" that you see on several of these houses. Use of SER is unheard of. If, in a service change, it is necessary to move the meter, the old circuits are extended with a gutter.

Even so, I've had to respond twice when the service "periscope" (of smaller RMC) was broken and the wires were making sparks. Once it was because the tree trimmer got careless, the other was when a truck backed into the meter box.
I can't help but speculate how often services like these are damaged.
Being here from the "Golden State" it did seem strange to see things like this... I lives in LI NY for a while & notices how odd it was to see the way things were done back there at first.... I'd only been there about a month & remember my girlfriends uncle needing a service upgrade & I went ahead & di the work for some extra $$$.... I did things the way I'd do it here & installed a 200A surface mount meter/combo panel that everyone here seems to have.. 2" RMC riser & weatherhead... I just made the basement panel into a subpanel.. The town inspector said as soon as he saw it "You must be from the west coast" Hehehe... He didnt have any problems with it & signed it off, but he said it was rare to come across the combo panels we use here... I honestly prefer the thought of unfused utility wiring attached to my house to be within something that can take a beating to at least some extent.... I also remember semi-flush installations being a rare occurance back east... On the opposite end... I came across an eerily east coast looking install over here... Meter socket on the outside stubbing into a panel in the garage with the main & distribution... Upon asking him about it, His EC brother from Vermont did the upgrade for him... Absolutely nothing wrong with it.... But seriously not the kind of thing you'd typically find in Lake Forest, CA

Randy
Quote
Absolutely nothing wrong with it....
Randy, the first time I visited San Diego I was pretty surprised to see the meter main thingies. Looked pretty foreign to my east coast eyes.

Anyway, I asked some of the "electricistas" wiring the $500K stucco "starter homes" in the nearby tract and they said it's a code requirement to have the main breaker outdoors. Can you confirm or deny this?

LOL about that east coast service in Lake Forest, Ca. I haven't seen a combo here yet (New England). I'll let you know if and when I do.

[This message has been edited by CTwireman (edited 01-03-2005).]
To those of you in areas that SE is not used it is no surprise you are skeptical of it's safety.

But think on this a little, we are not a bunch of mindless dolts here in the North East.

OK we keep electing Ted Kennedy but you guys have the Governator.

We continue to use SE as it works well, it has a long history of good service (small pun)

Look at the side of your own house, how many marks are on it from it being struck hard enough to damage a cable?

I am 40 years old and have been in the trade 23 years (oh no!) and in all that time I have never personally seen a problem / fault with SE and the large majority of houses and some businesses are SE.

I did see a piece of SE in a code class that a cable guy drilled through. He was inside the house drilling out with a long bit and nailed the SE, he would have just as easily drilled a PVC.

Admittedly RMC would have probably stopped him, unless he tried real hard.

For us in the North East seeing a service riser in the wall as is done in CA is surprising. We would fail for that here even though it is in RMC.

In the end if SE was as bad as you imagine the use of it would be prohibited. We use the NEC with 60 or 70 amendments, some more restrictive then the NEC some less. My point is here in MA electrical safety is top priority issue with our local code makers.

I will try to get some picture of nice SE jobs, but none of them will look as good as a flush mounted meter with the riser in the wall. It is not possible for a surface mounted equipment to look as good as hidden equipment.

I hope all understand that I am not saying one way is better than the other, only that both ways work and have a proven track record.

Bob
By the way I agree with Peter most of that ugliness is from the vinyl guys.

The first guy I worked for had a deal with a couple of siding crews to handle rehanging the services.

They would pry the meter, cable and weather head of the wall and let all of it hang from the splices at the top.

Even the old cloth covered SE seemed to handle this abuse even though it scared the heck out of me to get near it.
These pictures look like they're from this area & it is the siders as mentioned. The services are probably from the 1940s and are pulled off and rehung by siders. Usually the original install had supports every couple of feet, but the rehang gets one or two supports for the whole run.

Dave
Quote
In the end if SE was as bad as you imagine
Exactly. On my part, at least, it's purely what I imagine the cable to be. I've never seen any, except for the horror installations sent in to ECN.

I think it would be nice if we could get more photos of quality installs...of everything under the Sun. It's nice to know how the Other Guy does it.

What's typical in one region is unheard of in another, and that doesn't make either one better. It's just different and possibly better suited to its purpose.
I wouldn't want to go outside in snow/below 0° weather to reset a branch breaker, but there aren't many basements out here on the West Coast, & our climate permits us to conveniently put it all in one enclosure outside.
I'm interested in learning the "other way" too, not a joust.

Randy, did you think Long Island had the slowest suppliers in the World? They probably had to special order a service for "Some CA

Nut Case", and ship it all the way across the country.

About Aahhnold : CA elected another actor/governor almost 40 yrs ago.
This guy starred in "Bedtime for Bonzo", where he tried to teach morals to a chimpanzee. He ended up being the US President for 2 terms...Reagan. We are electing governors with better movies, now, give us a break

[This message has been edited by electure (edited 01-15-2005).]
Bob,just remember the "Guvernater" is married to a Kennedy.

Quote
Randy, did you think Long Island had the slowest suppliers in the World? They probably had to special order a service for "Some CA Nut Case", and ship it all the way across the country.
They actually had a Siemens all in one there... about a foot of dust on it