ECN Forum
I am finishing up a small power plant where shielded Cat 5 cable was specified for network communications between the generator PLC's and the master controller. Shielded cable really isn't necessary but thats what was speced and installed. The system will operate at 10 Base T speed. I have terminated both ends of all the cables with shielded connectors. My question is since both ends required RJ-45 plugs there was no way to take the shield to ground on either end. Does anyone for see any problems with this?
I agree this is not really the intent of the cat 5 standard and the shielding will change the impedance of the cable. At 10mz it should still work fine. I would pigtail and ground the shield at one end only, the end closest to the system grounding electrode, just to keep it from causing problems.
Nick,

"Rip" out enough of the Shield's Drain Conductor from each of the Cables (at the Controller's end), and Bond these guys to an Equipment Grounding Reference.

Insulate the Shields and Drains (wrap with tape, etc.) at the PLCs' ends, so no Shields end up touching Grounded Metal Enclosures, or EGCs.

Scott35
There are shielded RJ45 connectors. I have no idea where to get them--I've only ever seen them on the Cat5 cables that come with cable modems. Basically they have a metal piece which fits over the connector, makes contact with the drain wire, and makes contact with the two ground fingers on each side of the RJ45 jack (if it's a shielded RJ45 jack that is).
I am not familiar with the way that PLC's are wired but if all the wiring goes back to a central location a shielded patch panel will have provisions to terminate and bond the drain wires in the cable you have ran.

Here is one that I have found: http://www.siemon.com/e-catalog/products/HD5_Screened_Patch_Panels.asp
I disagree with Scott 35 on terminating both ends of the drain. In the past this has caused big problems in system work we have done with shielded communication cables operating at high frequency. The problems went away when only one end of the drain was terminated.
Sorry Scott, I misread your post. I thought it said terminate both ends, when in fact you correctly said to terminate "both" the shield and the drain. My apoligies offered.
This Is what I used although it was a different suppler. This is the cable used and exactly how both ends are terminated. I have some slack in the cable so maybe I should go back and cut enough back to get the drain wire out. It is only for terminations. What do ya think??

[Wow, the second link doesn't take you all the way there! Click cable training then installations then RJ-termination guidelines for Belden's shielded category 5 cable.]

[This message has been edited by Nick (edited 05-19-2005).]
What sense does it make to use a plug (especially one for shielded cable) THEN hard wire the drain wire? Anybody really think this was intended to be done this way?

There are shielded jacks that will make contact with the outside of the shielded plug to provide a ground path. If your equipment doesn't incorporate shielded RJ-45 jacks that should be a pretty good indication that shielded cable isn't needed and is going to be pretty tough to use if you do.

If you are bent on doing this what I would do is put regular RJ-45 plugs at the PLC ends. I too recommend that you only connect the shield at one end so cut the foil and drain wire back and forget it.

At the controller end I would terminate the runs on a regular patch panel, not a shielded one. Leave the drain wires long from each run and terminate the pairs in the normal manner. Again trim the foil back flush with the jacket. (The drain wire makes contact with the foil for the length of the cable so don't worry about the foil.)

Now you are going to have all these drain wires, neatly twist them all together and connect them to a ground wire (wirenut is fine) which goes back to the case of the controller or the electrical ground the controller case is connected to. That's it for the grounds.

Now simply use regular patch cords to connect the patch panel jacks to the controller jacks. The length should be so short that shielding is unnecessary.

-Hal
Hal, why would you say to use a regular patch panel instead of a shielded one that has the provisions to terminate the drain's ??
I just looked at the installation instructions for the Siemens screened patch panel, I've never used one so I'm not familiar with them. If you can deal with the cost it should be fine although the shielded jacks won't be needed. I also don't see a provision for connecting the ground bus to an external ground- maybe I missed it.

Oops, there it is, right in front of me!

Two ground lugs are provided (one on each side of panel) for attaching 4.115mm (6 AWG) ground wire to ground...

[This message has been edited by hbiss (edited 05-20-2005).]
I agree that it is definitely more pricey to use the shielded panel oppesed to the non-shielded one, but this customer spec'd shielded cable where there is no visible need for it. Why not use the right product to terminate it at the centralized point??
If you need to save the cost ok, but if the customer is paying for it, why not use the right panel and make the install look professional, I don't want to offend you Hal but wirenutting all the drains is a sloppy installation to these eyes.

P.S. It is Siemon not Siemens.

Come on, I know you could do it so it looks professional I know I could. There are lots of shielded cables and just as many times where they must be used (not necessarily like this particular situation). You learn to terminate the drains or shields in a "neat and workman-like manner" without help from factory assemblies because the don't usually exist.

I think this all illustrates the problems created when you try to second guess the manufacturer and do something they didn't think was necessary. If everything had shielded jacks you would simply use screened CAT5 and shielded plugs. Obviously this equipment was intended to be used with regular CAT5 and plugs so that is what you should be using. The manufacturer knows what the environment will be like where the equipment will be used and if screened CAT5 was needed they would have made provisions for it and included instructions on how to terminate the grounds.

Sometimes a little knowledge is dangerous.

-Hal
I would go with what gfretwell said as the first response. The 'neat and workmanlike' part could be achieved by stripping off ~12 inches of the sheathing, terminate into the plug at one end with the ground doubled back out of the plug, and use some sleeving and a crimp lug to attach the drain to a convenient ground. I have seen this done at patchpanels here in the UK on occasion, when cat5 has been used in an 'electrically noisy' environment, didn't seem to cause any problems at 10BaseT speeds.
Shielded RJ45 plugs will indeed fit into unshielded RJ45 jacks without a problem.

However, almost nobody (in the USA) uses shielded cable with that equipment, and it works just as well with unshielded cable.

I believe that the only reason for the prevalence of shielded RJ45 jacks on newer equipment is due to EC (European) regulations requiring them. (Screened twisted pair is a lot more common in Europe than it is in the USA).

Given that Ethernet was designed to run perfectly fine over unshielded/unscreened cable (and if you go back far enough, the 10 megabit variety was designed to run over standard telephone cable--cat 3 cable did NOT exist back then), I believe that screened twisted pair cable is a solution in search of a problem.
If the equipment doesn't have shielded jacks, then the correct answer, in my mind, is to ask the engineer who specified it this way just what, exactly, he wants.

I suspect the problem with that approach, though, is that he doesn't have a clue. (Otherwise, he already would have written very careful specs for what he wants.) I'm thinking this is a case of the guy thinking, "Shielded is better than unshielded, so I'll specify shielded."
Just thought of a few things - conserning this Shielded Cable for Operational Equipment Networks (LON Cables)!

Most Building Automation Networks & LONs use "COM X" type Cable for the links between Equipment and Controllers.

On a (common/current) Siemens Control System, the Cabling between FLNs (Floor Level Network controller{s} ) and TECs (Terminal Equipment Controller{s} ), would be COM 5 STP, and connect to these devices via an RJ-11 or RJ-45 Modular Plug (some simply Terminate to Terminal Strips).

The "COM X" Cable is constructed as follows:

[*] COM 3 is a single pair STP, with an overall foil shield and tinned drain cable,
which is roughly the same diameter as RG6 COAX,


[*] COM 5 is also a single pair STP, with overall foil shield and tinned drain, but is physically around ¼ the diameter of the COM 3 Cable.
</OL>

COM 5 Cable is used on faster LONs, and has a much higher twist ratio.

Just wanted to mention this!

BTW:
When I saw "Siemens", the name triggered this thought!
Oh, almost forgot to mention this!

Quote
Sorry Scott, I misread your post. I thought it said terminate both ends, when in fact you correctly said to terminate "both" the shield and the drain. My apoligies offered.
You better be sorry!!! I never make Miss Steaks!

Just kidding! I thought it would be funny to razz you!

Poor spelling intentional, too! (I.e.: I make many "Miss Steaks")

Scott35
Wow, allot of debate on this! I figure I will give a little more info on the system.
Scott, this is not LON works cable. There is a LON works comm link from each genset for generator control but this serves a different function.
Here is the PLC. There is one in each generator. They all have this network card. The other end of the cables come together in a master control cabinet where they terminate in an 8 port router which I don't have info on. The router is connected to a DSL connection and has an Ethernet cable running elsewhere inside the control cabinet. I'll post a picture tomorrow.

I think Solarpowered hit the nail on the head.

Quote
I'm thinking this is a case of the guy thinking, "Shielded is better than unshielded, so I'll specify shielded."
The engineer will never admit he speced something wrong.
Posted for Nick:
Quote
Picture 1 is at the generator end. There are 4 of these. Picture 2 is where they come together at the router in the DMC 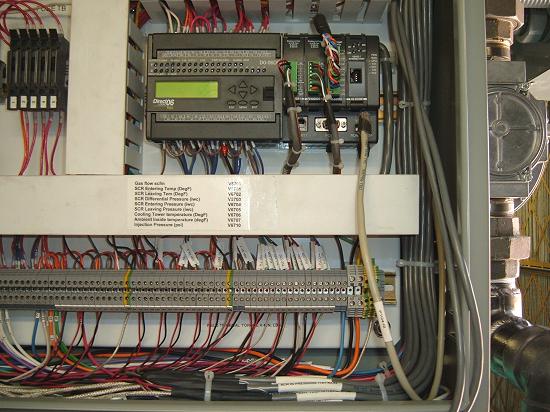 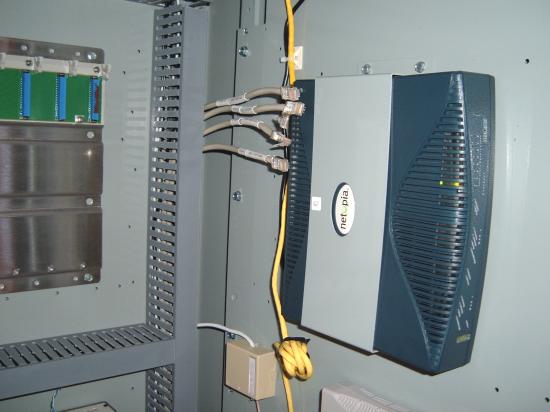 As a Computer Network Tech, this is my bread and butter.
The shielding is probably a little overkill, but why not, there is a possibility [garantee] of the Generator building up EMF noise later on.
The connector on the network card for the PLC should have a Shield ground point, Manufacturers have been requred to use one since about 1999, mostly because they can't buy the unshielded surface mount RJ-45 connectors anymore.
On the card I don't see the ground tab on the circit board, but some of them are a surface mount which I can't see.
The NetOpia router definatly has the ground tab on it. (I have not found anything new without the shilding tab in years)
That said. Here is a link to RJ-45 Crimp Terminators, http://store.pchcables.com/rjshmoplfors.html

With Ethernet the sheilding being grounded is optional (Defeates the purpose mostly) but otherwise it does shield high level EMF and Radio static.
Also they are not technically grounded. There is a large resistor in place to prevnt a true ground out and Fire hazzard.
© ECN Electrical Forums