ECN Forum
I was wondering, when did certain device colors come around. I notice pre 1950s that brown was very common, possibly because it was color of bakelite. Brown did continue into the 70s. Then the 1950s had ivory which seemed to be the color of choice up until about the very late 1980s when white started showing up? Ivory still seemed pretty common until the late 90s/early 00s when white seemed to be everywhere, which seems to be the case until present day. Then the newest color almond came out which is sort of a compromise between the two.

Right now there is a Slater decorator outlet on ebay that has a woodgrain face. I have seen these from Lutron but didn't know Slater had them. It must be from the 1970s. There are also some Leviton Centura outlets which I believe was the foreunner to the Decora line. The ones on there are white, and this is coming from the late 60s.

So I guess the decorator lines from Leviton and Slater had lots of color choices, but brown and ivory were just the typical choices.
I am old enough to remember when Brown and Ivory were pretty much all they had. I assumed it was just a manufacturing thing and people were used to the idea that this was all there was. I agree the brown plastic evolved from the original bakelite. I think the next color to come along was red, then orange but they were both industrial use items and very expensive. You were not going to see than at the hardware store or home store.
These days you can get about a dozen colors.
I agree with Greg that Brown & ivory were “it” back in the day. Red and IG Orange were commercial items, the red for emergency circuits in healthcare, the orange were isolated ground,

The color palette of decorator inspired choices started up in the late 70s, and expanded from there. Now, there are high end decorator configurations, naturally in decorator finishes. Faceplates with no visible screws, etc.

And yes, I also have been around for quite some time.
Gray has been around for quite a while at least since the 1960's, trying to think of all the colors, brown, black, white, ivory, gray, blue, red, orange, and almond, which is pronounced where most of the worlds almonds are grown as "ammond".

Leviton makes a rainbow of colors 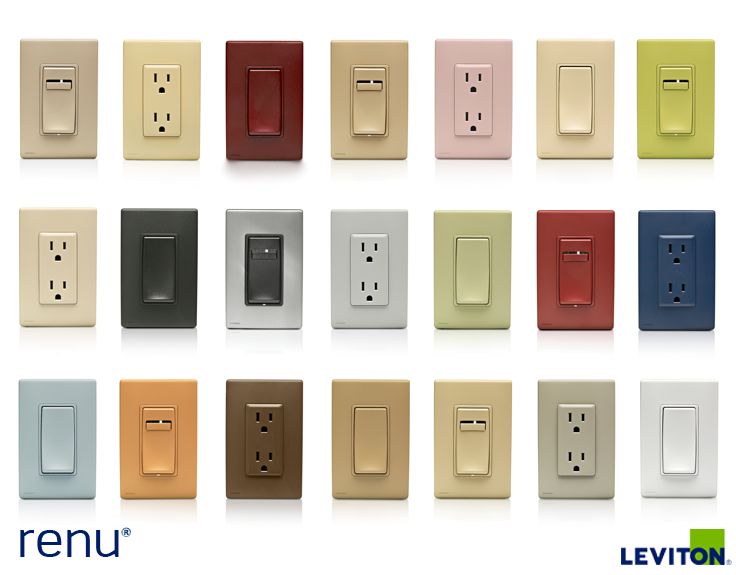 If all the ditzy interior decorators push these on mama pajama, i'll never get a trim out done......

You best hope they keep making them. Imagine trying to find one of those avocado switches for a 4 switch bank after they are discontinued.

I didn't know about that line, they don't look quite like Decora devices...

I agree gray has been around awhile. I saw some gray cover plates at Habitat that had the grooves in them, I think they were Slater.

The Leviton Centura line was similar to Decora, but the switches had two square buttons instead of rocker switches and the receptacles had a horizontal line betwen the two outlets. Came in several colors including white and this was in the late 60s. Don't believe they were Decora size, but not certain. Decora came out in 1972, I believe.

Slater also had a decorator line, rocker switches, and the outlets looked like decorator but had three grooves in the face, the outer ones which lined up with the receptacle slots. These also came in lots of colors. I'm not sure these were Decora size either. This was at least in 1973, if not available sooner.

I guess the decorator sizing was standardized by 1971, as most GFCI outlets followed that layout, with P&S being the first.

I think it's best to stick with the basics for wiring devices, either standard toggles/outlets or Decorator. Those aren't going anywhere, but who knows about the other high-end lines. Remember Acenti? Pricey and good luck trying to find a replacement now. If you do you're going to pay and arm and a leg for one.
I just did a quick search on Google for Acenti, and it sure looks like it’s available, and don’t appear to be too pricey. I never came upon that device, but it’s another Leviton item.

As to the Avacado device, maybe the Avacado bath fixtures and ceramic tile will be making a comeback.

I see a couple of colors in that group up there that have come and gone in the interior decorator world "Harvest Gold" is a blast from the past leisure suit days.
We had a pink bathroom here pretty much the exact color as the devices there.
The tile was the only part left by the time we got to this demo, the toilet and sink was gone.

Greg
The pink brings back memories also. Yes, Harvest gold along with Avacado were around, along with the black & white ‘subway tile job’ which is making a comeback.

I have to ask one of the plumbing inspectors if the ‘decorator’ color fixtures are around.

Hey, a ‘Thank You’ for the real nice renu color palette !!


Yeah well, i was fool enough to ride around with the color keys for a while Hotone

Only to realize just what posters are saying in this thread....:(

I'm back to chocolate & vanilla these days.....

~S~
Reminds me of the days when you could also get desk and wall telephone sets in most of those same colours to match the plugs.
At least in Austria and Germany "Does anyone recognise these switches and can tell me where to get spares?" is a fairly common question. Designs rarely last more than say 20 years, sometimes less, and replacement covers usually need to match quite exactly to fit even physically, let alone visually. Occasionally manufacturers re-design even the switch mechanisms enough to make them impossible to replace.

Actually it's more like the other way round - when a 1987 Siemens switch shorted out (well to be more precise the wiring between the switch and fixture shorted to earth and the switch contacts welded themselves shut) and burnt at my parents' office I was seriously surprised I could fit the old covers to a new switch! I'd have hated to replace an entire vertical bank of 8 individual switches!
White devices were available by the end of the 70's. We installed them when we added our second story addition in 79/80.

I do remember that they were not available at the local hardware store, only at the supply house.
© ECN Electrical Forums