ECN Forum
Why do stereo equipment need a grounding source at the receptacle?

Is the grounding a absolute must for semi high end stereo equipment?

And last but not least why do some manufacturers of equipment claim that without a proper or good grounding the equipment will not work.

Thanks in advance
Edward
Why does stereo equipment need a grounding source at the receptacle?

For the same reason any piece of equipment would require a ground- to eliminate the shock hazard should the case become energized.

Is the grounding an absolute must for semi high end stereo equipment?

Don't see what "semi high end" has to do with it (or even what it is). It's up to the manufacturer to design the equipment so that no shock hazard exists and if they can do that without a ground and still pass laboratory testing (such as UL) then they won't need a ground.

And last but not least why do some manufacturers of equipment claim that without proper or good grounding the equipment will not work.

Got me. They shouldn't be relying on the ground for any more than safety. Maybe they are trying to scare the customer into doing the right thing.

-Hal
Typically, grounding is a must in more-complicated audio setups where pre-amps, amps, mixing gear.....are used in conjunction with each other. They need to share a common ground, but even then, ground loops can happen, causing annoying hisses and hums. In some cases, they can be removed simply by REMOVING the ground from the offending source equipment. It's normally not safe to do this (especially with microphones and stage equipment), but sometimes the show must go on.

Other times, adding a ground to an ungrounded system works. You typically don't see this sort of problem with a standard home system with 3-4 components and a main tuner/amp. Those grounds are usually just for shock protection (which is the reason for grounds in the first place). It's just that, in protecting people from shock hazards, grounds can cause odd audio problems in larger systems. Assume that the ground in home devices are just simply grounds.
Ofcourse obviouse reason for grounding is for saftey. But the equipment that my client has is around $4000.00 and the power cord is only two prong.
I can not see the benefit of prividing him an additional grounded receptacle for his equipment.

Why do manufactures of electronic equipment insist on a grounded circuit if the equipment is only two prong???????

Thanks
Edward
The market for high end stereo is huge in places like Japan where they no doubt have different electrical systems than we do. Manufacturers might creat standards that can be applied regardless of system. Maybe that has something to do with it.

My experience in Pro audio here (in the states) shows me it is common to utilize ground lifts to get rid of buzzing. Trying to use audio gear in old buildings with gounding problems is dificult, and it is just easier to use ground lifts than to fix the electrical systems.

That's may be what he paid for it but it's only worth about $400. Why would they put a 3 wire cord and plug on it, it would cut into the profit.

Where were those $125 gold plated Hubbell "audio grade" receptacles again?

-Hal
Manuacturers are famous for having instruction manuals that are filled with bad grammar. That might be what is happening here.
If a piece of equipment has a metal case, it ought to have a three prong cord. Period.

Apart from safety issues, many electronics use the ground as a 'neutral' for the tiny amount of power necessary to keep things 'warmed up' (for instant 'on') or allow them to function when the appliance is "off" (timers and photocells are some examples where this might happen).

Now, the manufacturer may be confused between a "grounded system" and what you think of as a ground wire.
A "grounded" conductor is what you think of as the "neutral" wire. Not every circuit needs to have a neutral...for example, American 220v devices, such as space heaters, are served by two "hot" wires that are out of time with each other. Contrast this with the typical Euro "220", where there is a 'hot' and a 'neutral.' This might be what the manufacturer is referring to.

Assuming a product was bought in the US, came with a two-prong cord, and has a UL lable, you should be able to plug in without worry.
I notice that the instruction manual for a lot of consumer electronics starts off with a couple of pages of safety instructions that are boilerplate that has little or nothing to do with the actual product. For example, I just grabbed the instructions for my Sony DVD player, and there's a section on outdoor antenna grounding--but the player has no antenna input! It's a player, not a recorder.

While the cord on this unit is two-pronged, there is a section on grounded plugs. (They do, however, mention that there may be either a two-prong or a grounded plug on the unit.)

I've seen much worse than this particular manual.

What this long-winded discourse is getting to is that your customer may simply be reading the meaningless lawyerish in the front of the manual, and thinking that it actually means something.

[This message has been edited by SolarPowered (edited 06-16-2005).]
... many electronics use the ground as a 'neutral' for the tiny amount of power necessary to keep things 'warmed up' (for instant 'on') or allow them to function when the appliance is "off" (timers and photocells are some examples where this might happen).

I don't think so! That's a real stretch. There may be leakage but intentionally putting current on the ground (no matter how "tiny") would wreak havoc with GFI's and AFCI's wouldn't it. I also don't think the device would make UL or any other testing lab very happy either.

There is no reason for it, the neutral is uninterrupted and available so what would be the reason for using the ground?

-Hal
Arguing UL with Renosteinke is kind of like telling Eric Clapton how to play a guitar, Hal.


Quote
I also don't think the device would make UL or any other testing lab very happy either.

A listed occupancy sensor with the equipment ground removed--Test Points are device yoke, and grounded switchbox. 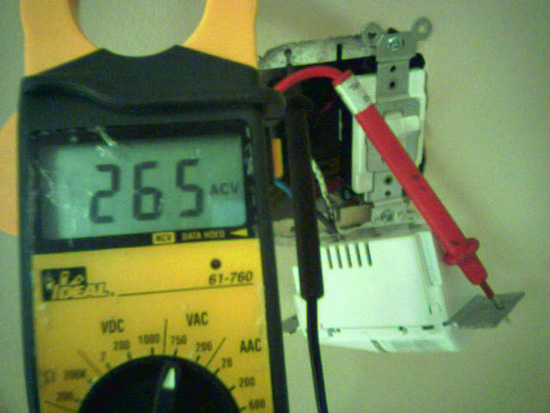 Quote
REMOVING the ground from the offending source equipment. It's normally not safe to do this (especially with microphones and stage equipment), but sometimes the show must go on.
Live entertainment is not good with dead performers. This is a very bad idea.

[This message has been edited by electure (edited 06-17-2005).]
Quote
Live entertainment is not good with dead performers. This is a bad idea.
Depends who it is.

Working at concert venues, I only see the lower end sound guys with 'ground lifts'

It is always the people with a little knowledge that think they have found a better way.

There should be no reason for a ground lifts if the audio company has professional power distribution equipment. That takes the buildings system out of the picture.
A listed occupancy sensor with the equipment ground removed--Test Points are device yoke, and grounded switchbox.

What is the supply voltage, the meter shows 265? I question the validity also because this is a high impedance meter, you are probably measuring leakage. Put a resistance across the test points and it will go away.

-Hal
Also remember where the equipment is manufactured is often in Japan, and perhaps the instructions are simply translated to English from Japanese instead of rewritten.

Funny about the non-pertinent instructions, I bought a new Sony Videocamera a few months back and found in the box a Safeguard guide that was full of non-pertinent safeguard warnings and was dated 1988.
The supply voltage at this time was 265 Volts from a nominal 277V system.
This particular model sensor has an equipment ground which the directions say must be connected for proper operation.
I believe the same model used to come with a neutral connection.

A resistance? How about a finger? The reason I took this picture was because someone told me that they had found one of these hanging out of a wall in an office aand had been shocked. I don't know why it was out, but this is the result. Believe it. Maybe I'll smash one and look inside, I'll post results.


[This message has been edited by electure (edited 06-17-2005).]
I suppose that I ought to expand a little on the "stuff that uses the ground path as a 'neutral' for the electronics."
I first saw this with some cheap timers. I later saw ti with soemphotocells.
There are a few clues that warn you this is the case. The most obvious is the lack of a neutral wire, along with a strong caution that the device will work properly only if installed wit a well-grounded circuit.
Another clue is a caution that the device may not work properly if there are other sensors or switches on the circuit.
Usually these are the cheaper controls.

The current flow in these cases is in the milli- or micro- amp range. In fairness, I have no idea as to just how much current is allowed. Also, there might be other electronic issues here besides operating current- I personally lack the patience to sit at a tech bench!
© ECN Electrical Forums