ECN Forum
This was/is in the Photo Gallery, & I moved it here to have some thoughts & discussion.

It is 'bolted' to the rail via two 1/4-20 machine screws, and the conduits are the rest of the 'support'.

It is not 'new' and seems to have been there for some time.

There's another pic of the troff that has clearance issues.

Please use the link, until I move the pic here. 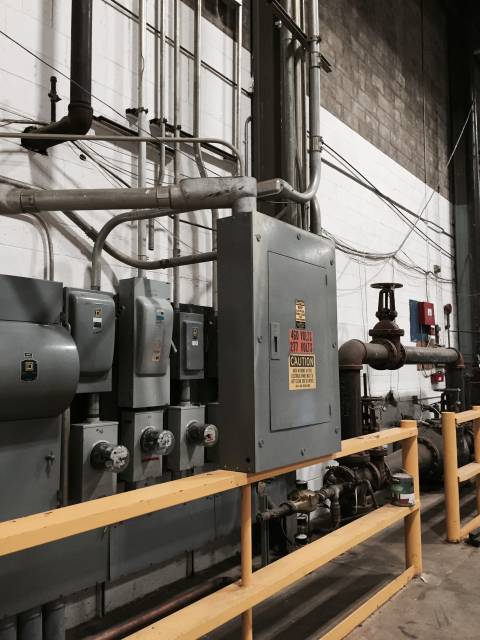 Other than a general requirement that boxes be 'supported,' the NEC is silent on the support of panels. There's no rule that the bolts have to go through the back of the panel. No listing requirement that you use the provided holes, either.

With that big pipe coming out the top, the panel isn't going anywhere.

Nor does the trough require access, unless you need to access splices. Think of it as a really big LB.

Now, for a different approach ....

I've had issues with such rails before. While I admire the desire to protect equipment from traffic, access is sacrificed. Heck, I've seen similar panels behind such rails, and you were required to climb on the rail to reach the breakers. In one instance, you had to climb up to a catwalk, cross over a conveyor, then climb down another ladder. (Talk about being trapped!)

I guess that the rail is there to protect things from traffic. If so, I'd question the couple of inches that the panel projects into the traffic lane.

Part of me wants to send the management of this place a thank-you note. Such a note would read:
"thank you- for letting me know up front just how little you think of your people. It's nice to see you're too cheap to hire real pros, and that your history of hack-work is so long that folks are forced to layer new hacks atop older ones."

Inspections? Yea, right. Such places NEVER have permits and inspections. Nope .... their management are all kings, even gods, in their little universe. To them, the only thing dumber than their customers are their employees.

Such people also can't ever be bothered by rules, codes, or bothered by learning. Any issue, they automatically 'know' the solution.

I believe the word for this mindset is "hubris." Whom the Gods would destroy, they first make proud.

At least they know their betters - and are trying to imitate them ... 'them' being the Chinese!
Reno:

You said.."Nor does the trough require access, unless you need to access splices. Think of it as a really big LB."

Do not all condulets require that the cover be accessable??
Think having to pull additional conductors.

I thought of sending the owners some comments, within a Notice of Violation for unpermitted work. This is very, very unusual for this Industrial/Office park as they keep tight reins on the tenants and contractors.

They need to be accessible but I am not sure they need working space as defined in 110.26
Greg:

The purpose of the rails that are installed is multipurpose, to provide protection from 'physical damage' and to 'prevent intrusion of storage in the 3' front zone.

Judging by the angle of the pictures, both LB's do not appear to be blocked. My guess by the pic is there was no room on the back wall for another panel so they hokey'd onto the railing. It may not be the prettiest thing and appears to be secured in place. The code covers safety, not looks. Likely an in house job.
I agree with John on the panel. They are using a raceway as support.
Silly question: How do you operate those disconnects?

It appears that the barrier places them out of reach- unless you climb upon the barrier.

Likewise, pulling the meters requires working space ... and I don't see enough. Lean over the rail? I'm not happy about that .... is there 36" between the face of those boxes and the rails?

Hotline, you're right about LB's requiring 'access,' but I see splicing points as requiring a greater level of accessibility. Your pic shows several LB's that are 'accessible,' but only if you're a hummingbird.
Reno:

When these rails are installed originally, there is compliant working space for utility workers (meters/CTs), and access to the means of disconnect. That also provides 'working space' of 36" minimum.

Access to the electrical equip is on either end, as at least one 'end' is open for access. In the pic, you can see an opening in the rail.
parkyinak:

Access to the LBs was not my intent. This pic is for the mounting of a panel. Mention of the clearances for the troff under the discos and meters is visable in this pic, but also in another pic in the Photo Gallery.

Reno mentioned LBs in one of his comments regarding the troff clearance.

Got it. Didn't see the other pic
That large conduit sticking out of the wall with the LB terminating into the panel appears to be supported by the panel. Shouldn't there be at least one hanger/support so that it's self-supporting (or maybe I missed seeing it)?
That conduit does not go thru the wall, it goes to another LB into the large disconnect visible on the right.

It is an interesting 'install'.
This is not a recent installation.
Almost all of the equipment in the OP picture appears to be over 30 years old.
I don't know how long that panel has been mounted in that location, but that cover style has not been available for decades.

I know up through the 70s, and probably still today, it was common for 'industrial electricians' to use the NEC as a bookshelf decoration.
JBD:
You're 100% correct, it is a dated job to say the least.

I've been in town for 14 years and never in that bldg. till the day I took the pic.

There is another pic here "Access" with a blocked troff in the same location.